In one of those weird coincidences that might later turn out to be a conspiracy, it appears every short anthology story I’ve written in the last year or so is coming out within the same few months. I’ll add all these to the ‘Other Work’ page as well, but if you’re here looking for the latest hot updates, her’s a tasty wedge (with a bit more ramble about each one). 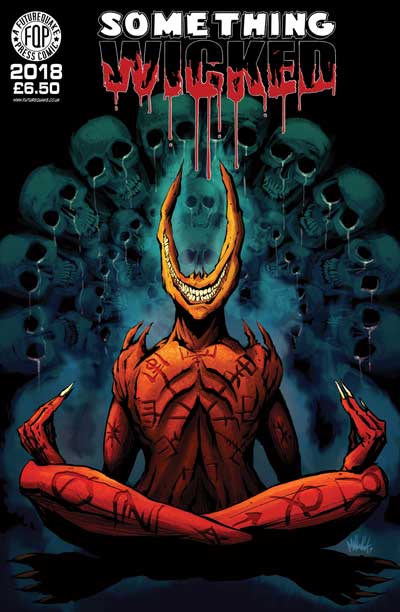 I’m a big fan of the team at Futurequake Press, as they made one of my first published comic stories happen in the form of The Half-Baked Sacrifice, now available both in the relevant issue of Something Wicked and in my quickly homemade anthology Comedy & Errors.

So it’s good to be back there this year with a new story called ChitChatChum, which I wrote last year, and if you head on over to FQP’s blog, you can see a snippet of the lovely art by Mike Walters.

I wrote this quite a while ago, so I was pleased to revisit the finished version and discover that, yes, I still find it enjoyably grim. Particularly if you enjoy some Black Mirror-esque tech/body horror, this might be right up your alley.

You can buy the anthology from FQP’s website here, or on Comixology in shiny digital. 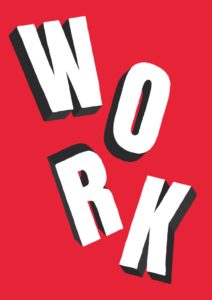 Beginning around the start of this year, I’ve been going to the Meetup group Work In Progress comics, where a bunch of London comic creators meet up to chat about comics, creation and their feelings about both.

It’s been a great group to get to know, thanks especially to the excellent Joe Stone for his work running it, and as luck would have it, this year they put together a group anthology which I was able to get into.

This is a collection of stories on the theme of ‘Work’, and I contributed a two-pager called Retirement Plan with art by A.I. Miller, who I met through my work with The Comic Jam. I like our story a lot, it’s got some strong robot melancholy, and I also think it’s a really strong anthology as a whole which is definitely worth your time.

I’ll add the buy-online link when I have it, or, again, if you’re at Thought Bubble, Joe should be selling it form his table. 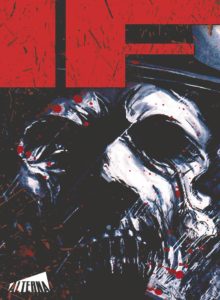 Lastly, I’m also in the 2018 If Anthology, collecting a group of stories on the theme of ‘Horror’.

For this story, I decided to reunite the 2017 Christmas story team of myself, artist Robert Ahmad and letterer DC Hopkins for a five-pager about the dark underside of cute-seeming internet cats called Jenny & Max.

It’s a story which threads the needle between adorable and scary in a way I’m quite pleased with, helped by the art really selling the cute kitty and DC Hopkins going above and beyond to make the fiddly mock-Instagram layouts work.

I’m aware it’s part of a much larger anthology, but if you want to grab the book to read my story, it’s up on Amazon, or you can order it from your local comic shop using the info here.