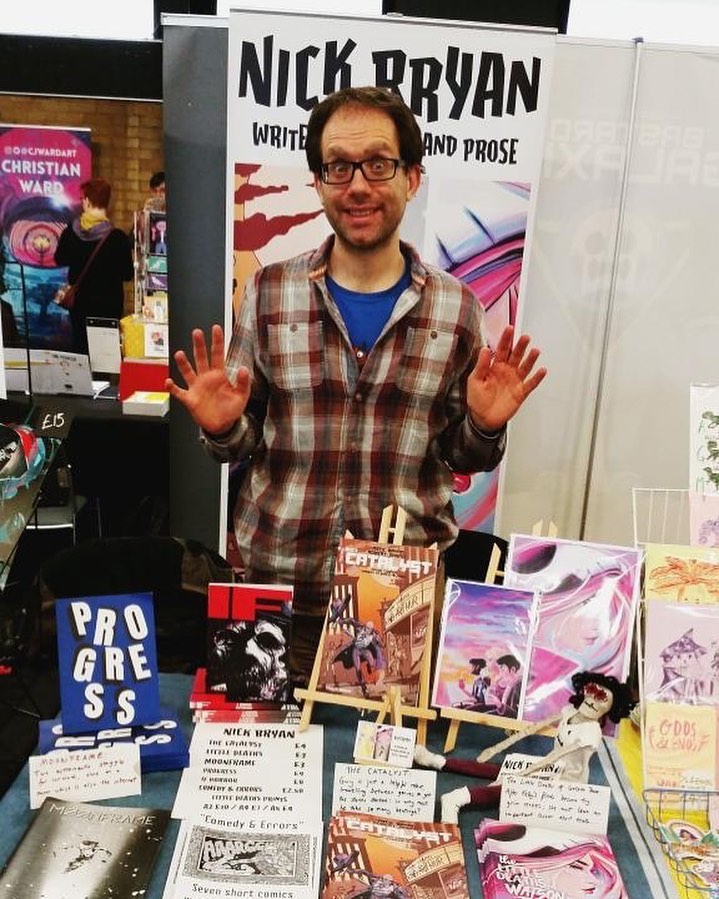 Nick Bryan is a writer of comics and prose from London, inspired by a combination of mounting fear, an eclectic range of comics, TV & literary novels, and his vague recollections of a philosophy degree.

He has successfully funded a new comic on Kickstarter every year from 2020 to 2022, covering the one-off urban fantasy short story And It Snowed (with Robert Ahmad), the first issue of eclectic fairy/social media series FairyFare (with Rosie Alexander) and his most ambitious project – the rural dark magic graphic novel Death of a Necromancer (with Ahmad again).

Nick also wrote The Catalyst, a scifi story published by Comichaus in 2019 about a robot’s genre-crossing journey of self-discovery, with art by Ahmad- this was named one of the 50 best indie comics of 2019 by Pipedream Comics.

His self-published one-shot The Little Deaths of Watson Tower with Rosie Alexander, about a group of children learning about death by becoming grim reapers, also appeared on the Pipedream list in 2018. He’s contributed extensively to online comic collectives The Comic Jam and WIP Comics, appearing in WIP’s annual anthology every year since 2018.

Outside of comics, Nick has written the self-published Hobson & Choi novels, along with a range of short fiction.

When not writing his own stories, he discusses those of others in the Moderate Fantasy Violence podcast with Alastair JR Ball.

Nick Bryan can be contacted most reliably on the following places, with unwisely different social media usernames:

Alternatively, here’s a nice form which sends him an email.