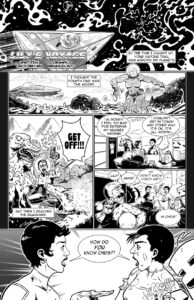 So, whenever I tell people I’m writing comics, they always ask, with an air of interest, how it actually works and what that involves. They never mistakenly believe I’m the artist, though – apparently I just don’t present the air of someone who can draw.

Still, in a bid to demonstrate the process and rob me of any artistic mystique I might’ve had, I’m going to take one of my one-page comics, first presented on The Comic Jam, and show you how it was made in punishing step-by step detail.

The one I’ve chosen is Lily’s Voyage, with art by Brian Flint, because it’s one of my favourite comics I’ve done, yet runs only one page long so this blog won’t run to novella-length.

It was originally posted as part of ‘Six Degrees of Separation’ week on the Jam. You can see the layout to the right or, again, click through if you want to see it at a bigger size.

I’d recommend reading the thing at least once before I yank it to literal pieces. Seriously, do it, it’s cute. If you want to read it in print, it’s also part of the Comedy & Errors anthology I’m currently selling on my new shop. (CAPITALISM.)

As you can see, I’ve gone full pretentious-screenwriter script-in-a-typewriter-font here. I’d love to say I made the decision myself, but this is the default style used in the ‘comic script’ template on Scrivener, my writing app of choice, and I’ve just kept it.

This template, by the way, is handy if you want to hammer out comic scripts without hours of dull format changing. It comes pre-loaded with styles for all your obvious elements (page number, panel number, description, dialogue) and toggles between them quickly, so you can focus on getting the golden words down rather than endlessly changing the font size.

Or that might be a downer if you had ambitious procrastination plans, I dunno.

Template co-creator Antony Johnston has written a lengthy post on using Scrivener for comics if you want some help with the template – I don’t do everything he says here, but the part about halfway down (in section 3) is useful for getting to grips with the basic styling.

Here, as you can see, we are establishing a ‘look’. In these one-page comics, I generally take the view that I don’t have time to create a magical new world and explore it in detail, I’m just gonna invoke some tropes and then do some business.

And here we see Brian bringing that feeling to life…

True process fact – I have known Brian’s first name for about three months at this point, seen it written down many times, stared at his gorgeous art in this comic a lot and only now noticed that it’s almost the same as my surname. A true student of the human animal.

And yes, the “six planets” is a reference to the six degrees of separation theme, along with the fact she’s apart from someone – oh, and the fact this comic has six panels. I wouldn’t normally write six-panel pages when the story is only one page long, as it leads to quite small images and it’s nice to leave myself and/or the artist some leeway to imagine a bigger establishing shot or pay-off.

But the number was right there so I decided to break the rule.

I’m not actually breaking the story down to show one panel per planet though – I considered it during my mumbling note-taking phase, but it took away from the ending to cram it into a single image. Wanted to have some time for a full sequential series of beats.

For that reason, here we see she’s already reached item four on the list.

I think what I like most about this panel (yes, much of this blog post will be mutual appreciation) is the expression on her face. The clear disgust, even through the helmet thing. It’s beautiful.

Anyway, yes, the situation starts getting mankier and then, because the writer knows the comedy rule of three, we turn to….

Why ducks? Why not. I wanted something not-too-obvious and maybe faintly silly/quaint. There’s maybe a hint of the 2000AD in there, which definitely jibs with the way Brian’s drawn it. 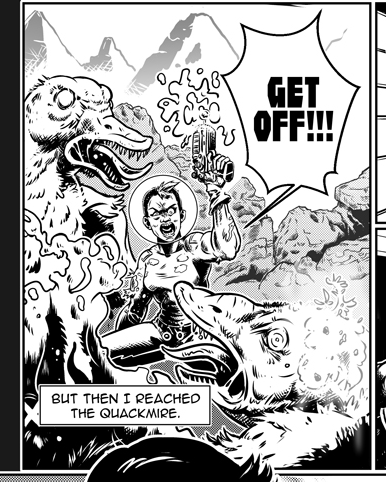 As you can see, he’s reduced the number of Fs in “GET OFFFFFFF!” Probably for the best.

Hardcore fans of reading will note the joke about “the quackmire” here, rather than the originally scripted line. This is the one last minute change I made to this story, and I did it for a couple of reasons. Firstly, it is a pun, I like them, and if you don’t you’re wrong. Secondly, well, we kinda need to hit panel 4 for that… 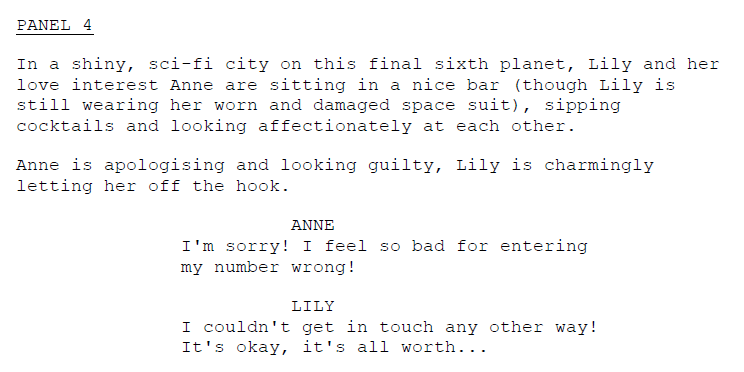 The reason for the change may still not be obvious. I’ll get there.

But yeah, we’re now moving to the final three-panel run of continuousmoving narrative, and the part where I include  a rare moment of small cute romance. 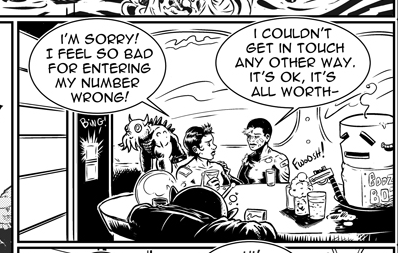 Big fan of the way Brian took my not-that-informative description of the “nice bar” backdrop and threw in a Star Wars cantina vibe. That robot on the right looks like a cool dude.

Anyway – here we see Lily’s love interest Anne apologising over a “number”. As you may remember (or can see if you scroll up), my original script for the previous panel referrer to “number five”, as in the fifth planet she reached.

The first finished version of this comic had the dialogue as originally written, but when I showed it to someone, they didn’t fully get that Anne was referring to phone numbers here, because I’d used the same word to describe different things right next to each other.

So, just in case, and because I thought of a good duck pun, I went back and inserted “quackmire”. Small thing, but I think it improved it.

And now we move towards the punchline, wherein our lead character discovers that she probably didn’t need to go on that epic quest after all, as she and Anne had a mutual friend all along. Lily’s previous line of dialogue “I couldn’t get in touch any other way” was maybe a shade on-the-nose, but I wanted to give the point another kick. 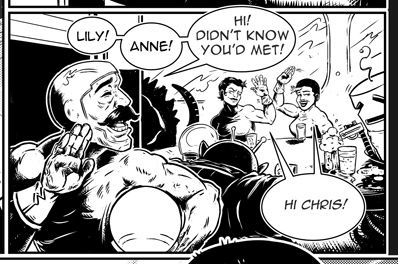 Strong moustache from Chris here. Again, there’s some kind of retro-pilot vibe there, and a nice matey expression from Anne. Meanwhile the robot continues drinking.

Here’s the punch, and again the “Wait, what?” expressions are just perfect. I wrote this one with a slight worry that I could/should have really laid out exactly what’s happening in punishing explained-on-the-page detail, but thankfully the art is beautifully clear and smooth and really sells it.

There we go. Thanks one last time to Brian Flint, who you can follow on Instagram here, or buy his Kuru comic on Comixology. Or both. Why not do both? 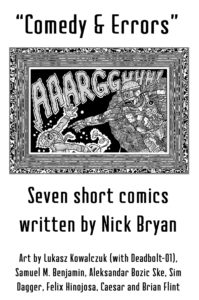 And speaking of buying stuff (oh yeah, work it), as I briefly mentioned above, this comic appears in my new black-and-white print comic anthology Comedy & Errors.

In fact, it is the very last page.

As of this typing, there are around 13 copies left, so check it out quick before I run out and may or may not go back to press. Buy one now on my newly assembled shop!

And feel free to let me know if this was enjoyable/interesting and I may even do it again.