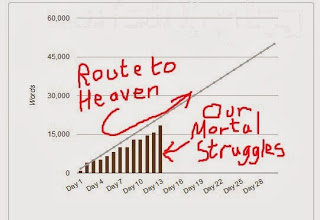 All on target this week, as I sailed through the final stages of Novel Draft The Third. This will be a familiar tone to regular readers of this blog, most writing updates in the last month or two have broken down to: “Today I reached another book milestone!”

But just to reiterate what it all means: I am now at the point where I will show my book to some other humans. I’ve recruited a few volunteers from my writing group and personal life, now just gotta email it over to them. Once I’ve plucked up the courage to tackle Scrivener’s sometimes-horrific ebook compiling options.

Anyway. In a bid to keep the blogs interesting, I’m going to run some actual stats for the whole project, to see how much I cut, where it went, what it all means, etc. Will the numbers tell me anything of worth?

I don’t know, as I haven’t generated any of them at the time of writing this intro. Better go do that now.

THE BIG ONE: Total Word Count

First up, and most tedious to calculate as Scrivener clunks and struggles when putting a whole novel of scenes together: the total word counts of the three drafts.

The good news: I almost cut out ten percent of the novel, which I’m sure someone said was a good baseline amount to chop. It’s a good bit shorter anyway – a relief, as there were times I thought I wasn’t making much difference in length terms.

Much more surprising is the news that I removed more (just) with my second big pass than I did the first. During that draft, I chopped out, rewrote and condensed whole scenes, whereas the one I just finished was merely me picking through it line by line, improving flabby prose, reading it out to myself – generally beautifying the fucker before I let beta readers have it. Because if the main beta feedback is “You used the word actually too much, actually,” it won’t be hugely useful.

Does this mean I have more to do in terms of second-draft plot refining stuff? Possibly. But I’m in such a love-hate spin with the whole book after four months of intensive editing, I’d rather like to get some other opinions to bat against before doing any more sweeping changes.

Scale of Offcuts – The Butchery Index

And now, a stat I find compelling, but others may not. Let’s find out together.I have a Scrivener directory called Offcuts where I collect any scene I’m removing, rewriting, substantially changing or any other degree of alterations beyond minor text-picking. I don’t want to delete them, in case they’re one day called into service (in this project or another), but it’s possible they will never see the light of day.

The size of this directory at the various stages was…

Wow. That is a lot of unused flesh. Nearly a whole NaNoWriMo novel,  approaching half of the current book length. A lot of it isn’t material that was necessarily deleted, just heavily rewritten, but still. I enjoy looking at this number, it makes me feel like I must have obeyed the editing commandments and killed at least a couple of darlings.

It makes fair sense this wouldn’t change much in the third draft – after all, chopping and changing whole scenes is the preserve of the second. The third was line-by-line stuff, and I have full copies of the first and second draft saved if I desperately need to resurrect them. Constantly resaving the same thing gets silly after a while.

Break it down, down down down… I have three parts to my novel, because there’s nothing I enjoy more than a rigid beginning, middle and end. So, in the interests of science, how did those change over the three drafts?

To my not-particular-surprise, the middle part took it hardest. I did a lot of work tightening that up, because it was flabby and because that’s where there’s always the most waste, in my experience of stories. I rewrote a couple of whole chapters, pulled a few bits in and out. Interestingly, the first part grew slightly longer in the second draft, I guess I did expand a plot point.

Most impressive, though: I took a similar amount of words from each part during the third draft, which demonstrates I have roughly the same amount of useless bibble in any given bit of writing.

Dates to celebrate in later years

Just out of interest, based mostly on Scrivener folder creation dates…

And that’s with December and February basically off the job, working on other projects and/or Christmas. I was editor of a TV website for the whole of 2013 too. I have this dream of hammering out another whole first draft before the end of this year, but we’ll get back to that in later blogs.

For now, considering it was once a hundred thousand words long, I’m considering this an okay effort. Good head of speed towards the end there.

Okay, did I miss anything?

That’s probably numbers aplenty for today, considering this is a novel draft only a small percentage of you will ever read. But if this tells you anything about my writing achievements and helps you compare/contrast/feel good about your own, that is excellent.

If there are any obscure stats I haven’t run which you would be interested in (or think I would be), give me a shout in the comments. Make sure to show your full working, I’m a simple soul using Windows Calculator.

Previous Post: « My Writing Music – Songs to mash the keyboard to
Next Post: All You Can Eat Media – Nick vs Netflix, Man vs Marvel Unlimited »