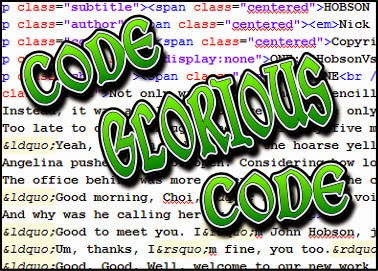 I have been locked in my room at my tiny corner desk, working on the process of turning my upcoming self-published book into beautiful HTML. It has taken a long time. I can neither confirm nor deny that I was up at 4AM Thursday morning, listening to the birds tweeting outside (and, for once, not tweeting much myself) working on exciting tasks such as reinserting italics.

As you may gather from this nuts-and-bolts self-pub stuff, the day of the Hobson & Choi release is getting very close now. So close, in fact, that I may put the cover up next week, announce the title, blurb, maybe even a date. I’m 90% sure that will happen.

But for now, here’s a blog post about the experience of processing a book into HTML. This is not a walkthrough, because there are plenty of those and I don’t have sufficient advice to justify bringing another one into the world. The posts I used to guide me was this one by Guido Henkel, it’s pretty comprehensive.

First and foremost: yes, turning a whole book into HTML by hand is very boring and fiddly. To be honest, If I didn’t already have a basic working knowledge of the language from my day job in IT and working on various online projects, I probably wouldn’t have bothered. And if I had, it would have taken an eternity and come out terribly.

Having said that, it is not impossible. Even if I do have an advantage by writing on a comparatively short book (approx 50,000 words), it can be done without giving over weeks of your life. Yes, you will eventually need to trawl through your entire document for something and it will be dull, but the clever use of find/replace gets you a lot of the way. That Henkel walkthrough contains a lot of top tips in that direction.

In my case, my undoing was the em-dash/dash distinction and also the repeated tweaks to how I styled chapter-heads. In fact, you know what was the biggest pain? Persuading the table of contents to work in all formats. I only included it as a bonus anyway, I’m not sure fictional books really need one. C’est la vie, readers.

Still, I’m determined to take a stab at competing with other ebooks, and doubt an automated Word conversion was going to do it. Which meant either paying someone to do a decent conversion or launching into HTML myself.

Those of you with unlimited budgets and a hatred of technical nitpicking should definitely get someone else to do it for you. You’re not any more or less of an author if you can’t do HTML, after all. Much like I didn’t do my own cover design because I’m not a graphic designer.

(My cover design is great, by the way. Excited to blog it up next week.)

But for those of us who into this shit, there’s something weirdly fulfilling about building something and seeing it slowly take shape. It’s not dissimilar to the writing process itself, only much quicker and with the added perk of specific instructions and an easy way to determine whether you’ve succeeded.

And I think I’ve done okay, although this is my first time through, alright? So if I end up finding some enormous mistake when I go live and it turns into A Storm Of Stress, I reserve the right to recant this positive tone and start using phrases like “living motherfucking nightmare”.

For now, though, this feels like a moment of calm. A brief pause between the worries of “Oh god, have I done enough editing?” and the later panic of “Oh god, is anyone going to buy it now?”

So that’s nice. I can save loads of money on holidays in the future by just giving myself massive amounts of HTML to edit, can’t I? I’ve already got plans to do the second H&C volume in the not-too-distant future, so don’t worry, I’ve got plenty to do. Please do not send me your HTML parsing tasks – unless you are willing to pay for my time, in which case absolutely get in touch.

I think we’ve covered my emotions about HTML editing in enough detail to keep even the keenest of web-therapists happy. Join me next week for more hard facts about the release. Exciting, eh?