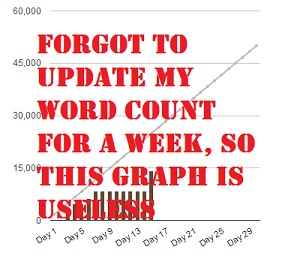 You may remember my blog post of a fortnight ago, where I unveiled my plans for NaNoWriMo 2012. Well, I’ve done some writing today, so have time to post a midway update. As I slap this up on the blog, at nearly-midnight on the fifteenth, NaNo is exactly halfway over.

Quality Over Quantity – The Reality

As I said in the previous entry, I’ve been promising myself I’d slow my NaNo pace, accept a lower word count in exchange for a more considered plot, better prose and, y’know, actual themes and shit. Most previous years, I have made this vow and failed, allowing myself to be caught up in the competitive rush to 50K, and “won”.

Well readers, I’m proud to announce this sickening run of success and achievement is definitely over now. Unless I completely lock myself indoors for the remainder of the month, I’m not going to hit fifty thousand. But I am fairly pleased with what I’ve written so far, a mere fifteen thousand.

As the properly NaNo-brained of you already know, that is a fair way below the proper midway target of twenty-five thousand. But the writing itself doesn’t suck, I’m pleased. Still hoping to finish the first major segment of my novel, too.

How To Fail Gloriously

So, have I learnt anything, aside from accepting non-success?

To be honest, my main lesson was one I’d suspected from the start: for me at least, planning is key. I’m trying to produce something with themes, threads and an interesting plot, mostly to avoid having to ram them in later. These do not tend to appear by themselves.

Not that making it up as you go along, then going back and editing heavily once you’ve worked out what the book’s actually about, isn’t a valid approach – it’s just I’m a little tired of having to rewrite NaNo novels basically from scratch before I can read them without wanting to cry in a bin.

Maybe finishing that Creative Writing MA has left me with a new sense of quality control, who knows. Or I just spent enough time sobbing in skips whilst finishing my thesis. One or the other. (I got a merit in the MA, by the way. Which means graduation! Party time.)

Anyway, based on boring multiplication, I should finish out the month at around thirty thousand. Check back in early December to see whether I got anywhere near it.

Previous Post: « All NaNo’s Eve – Belated NaNoWriMo Prep 2012
Next Post: The top ten TV shows of the year on The Digital Fix. What do I love? »