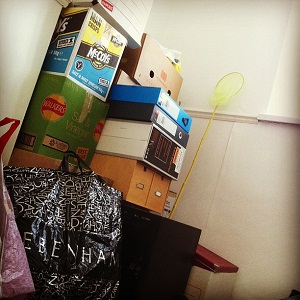 I’ve been slack on blogging of late, due to moving house and devoting my typing time to working on the actual stories, rather than masturbatory writing about writing. (Also, September/October means a lot more TV reviews.) See the picture to the right for an illustration of my housemove, doubling as a metaphor for writer’s block.

But it’s nearly November, which means NaNoWriMo, and writing bloggers across the world breathe a sigh of glorious relief. Because, hey, no need to think of a topic for the next few weeks. Just start with NaNo and go from there!

And I’m not one to turn down easy inspiration, especially because it’s the 31st October (Happy Halloween!) and I haven’t done a shred of planning yet. Or even decided my exact approach. So, let’s talk about that. (This blog post totally isn’t an excuse to put off planning. Shut up.)

Last November, I decided to work on 50k worth of short stories, rather than add to my pile of unfinished novel drafts. It felt good at the time, although I haven’t yet finalised or sold any. Mostly because I’ve spent the bulk of this year finalising my novel from NaNo 2010.

So, this year, back to basics. After months punching and hacking at the same wall, I desperately want to feel the warm, damp flow of actual creativity again, so time for a new book. To be precise, a massive expansion of a story I wrote last November. See how everything’s connected?

Not for the first time, I’m aiming to focus on quality over quantity this year, and settle for less than the regulation 50k, if it means I produce better work. I’m pretty sure I’m a better writer thanks to the MA, so want to create something that doesn’t require rewriting from scratch later.

Of course, I may still get swept up in the competitive rush, produce 50k anyway, then delete the last fifth for being garbage. Again.

There’s been discussion in the NaNo community about planing lately, as you’d expect. In particular, planning vs “pantsing” – the art of making it up as you go along. (For more about pantsing, see this blog post on the NaNo London site. Contains no actual pants.)

There’s a lot of pantsing in NaNo, and I don’t just mean systematic American-style bullying. You’re writing at speed, the word quotas are terrifying, stopping for an evening to re-assess your plan means over 3,000 words tomorrow, so tempting to just power through.

Unfortunately, I’ve seen what happens when I power through. It leads to rambled, clunky sentences, endless funny-but-needless dialogue and characters enacting convoluted schemes instead of the obvious simple solution, which I was too hurried to realise. In short, all the things I’m trying to avoid. Pantsing may work for some, but I need a plan. It’s nearly midday on the last day of October and I don’t have one.

Gosh, I wonder what I’ll be doing this afternoon. Blogs will hopefully happen sporadically during the month, depending on level of panic, etc. London people, I will be attending at least some of the meets organised by the nice NaNo London folk (especially the All-Nighter, because it’s fun). Non-Londoners, I imagine it will be mentioned on my Twitter. And, y’know, those of you doing NaNo… how’s the planning going? Anyone else doing it in a rush this afternoon?

Previous Post: « My story "Low" is up on With Painted Words!
Next Post: NaNoWriMo 2012: The Halfway Point »