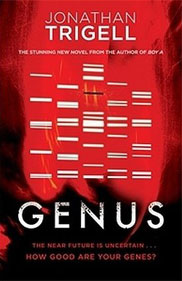 My book reviews will rarely be prompt, as I read painfully slowly and pick most novels up in the Kindle sale. Nonetheless, I did recently finish one: Genus by Jonathan Trigell. After taking a month to read it, I should get some thoughts down before I forget them, so let’s go!

So, we’re looking at a future London, where society has turned dystopic after genetic modification becomes widespread and physical perfection becomes purchasable. Which, of course, leads to those who can’t afford it becoming a clearly advertised underclass. Crime, corruption and general shouting ensue.

Most of the story takes place among said underclass, specifically the rundown “Kross” region (formerly known as King’s Cross, London), because I suppose it would be dull to watch the pretty people be obnoxiously content. Although if you do want that, you can always watch Made In Chelsea.

This is one of those science-fiction books where the allegory doesn’t exactly hide itself– Trigell is upfront about his fears concerning gene improvement, and the real possibility of that technology helps draw you in. And yet, despite it being a grounded premise, he has a lot of cool (or worrying) ideas about where this would lead.

He’s also using a lot of stark descriptions to convey urban squalor, which I’m on board with, and despite rapid flicks between POV characters, they all have their clear vocabulary and backdrop marked out. Some of the catchphrases to identify certain characters (especially Detective Gunther) get samey, but it does fit his crude, hammering self. I also enjoyed the tangential vignettes.

I wasn’t as taken by the actual story as I was by Trigell’s vision, which is an issue for me (perhaps more than it should be) because I admit to being a very plot-orientated reader and writer. The broad nature of the climax seemed slightly predictable, although the execution meant it never stopped being readable.

So, yes, this is an interesting contemporary sci-fi book if you’re looking for one, and is available on Amazon in the usual formats if the mood strikes you. Let me know below if you’ve read it and have strong opinions. Or any opinions. Everyone is welcome. Why not tell the group how you feel about paying to improve your babies?