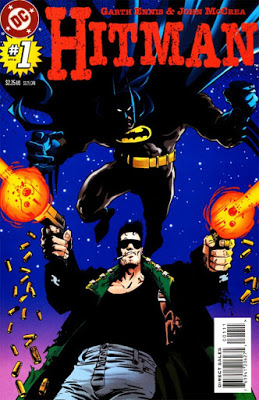 I’m a big Garth Ennis fan – his Preacher series was important to me in my teens, his Punisher Max run one of the best things I read in my twenties and I’ve never read a comic by him that isn’t full of strong storytelling. Even when he might not be working on a classic concept, the man knows his way around a comic book page.

I’ve recently been filling some gaps in my cultural intake, including a few major Ennis works that I never got round to. First up, almost exactly a year ago, was his Hellblazer run with Steve Dillon and others.

Today, I’m moving on to Hitman, a five year series with artist John McCrea about Tommy Monaghan, a super-powered gun-for-hire running around the DC Comics superhero universe. It wasn’t easily available for a while, but DC have put it back into print in seven collected books, not to mention slapped the whole thing up on Comixology.

So, I read the entire sixty-issue series (plus the extra bits and bobs reprinted in the collections) over the course of about a month. Normally it’d take me longer to read a run of this length, but as I said earlier, Ennis is just that good, and so is McCrea. The stories slip down. 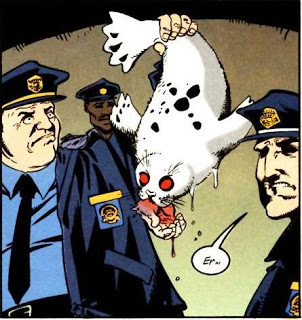 Zombie sealife – no, it wasn’t a joke

When writing the above intro, I almost didn’t mention the super-powers aspect of Hitman because it often barely seems to matter. The focus is always on the character of Tommy Monaghan and his friends, a crew of fellow hitmen who all hang around in the bar, take jobs and then go back to said bar to bitch about them. They rip the piss out of each other but always have each other’s backs when it comes down to it. It’s sweet, in an incredibly violent kinda way.

And because this is set in the DC universe, where every fantasy or sci-fi genre convention has been introduced somehow, Ennis can throw almost anything at Monaghan and friends, and they just nod wearily and do darkly comic ultraviolence to it. Demons and vampires? Dinosaurs? Zombie sealife? Batman? They’re all in here somewhere, having their arseholes filled with grenades. Well, not Batman, he just gets puked on.

But as I say, these clearly aren’t the parts that really interest Ennis. The stories where Monaghan and crew mutilate genre standards are usually the fun comic relief storylines between the main ones, which deal with the mob, the military and the real-life consequences of living a life full of ridiculous violence. Especially towards the end, as the constant waves of death start to finally penetrate the main cast, it gets downright sad.

And his super-powers, well, Ennis doesn’t seem that bothered. Monaghan can do x-ray vision and telepathy, but their only purpose is to maybe explain why the hero is a little better at surviving gunfights than most. It was the same in Preacher, to be honest – Jesse Custer could compel anyone to do anything via the Word Of God, but tended to just punch them instead.

If you enjoy a charismatic likable-but-doomed anti-hero story, then Hitman is definitely worth a shot. He and his friends are a great ensemble, the jokes are funny, the gunfights and action are beautifully executed by McCrea. Some mainstream artists struggle to make complex fights clear without the shortcut of bright costumes or obvious energy blasts, but McCrea renders the environments clearly and communicates every important move. It really is like a good action movie.

In fact, McCrea nails it when the superheroes show up and when Tommy and friends are hanging around drinking in the bar and when Tommy gets zapped into the future and when the dinosaurs show up and every other thing he’s called to draw. The consistency and clarity is a joy to behold.

Ennis says in the text piece that ends the series that he feels like he could’ve done more Hitman, and I loved the book, so obviously part of me thinks that’s a shame. On the other hand, I can also respect the clear beginning, middle and end here. And if the ending isn’t the one Ennis was planning, he does a damn good job still making it feel entirely inevitable and necessary. 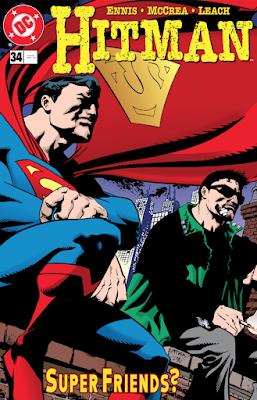 Yes, if you’ve read many Garth Ennis comics in the past, you’ll notice some recurrence of pet themes. There’s male friendship, the consequences of violence, flashback stories about soldiers, a quick trip to Ireland and the need to poke fun at superhero comics (although also an excellent Superman issue where Ennis plays them entirely straight).

And yes, he has tackled these things a lot, but as someone who has read a lot of his work: this is one of his best renditions. These elements always feel in service of the story.

Like many 90s-and-earlier comics, it occasionally hits some bum notes when re-read with 2015 cultural sensibilities, but (perhaps due to the PG-13-level content rating), it rarely goes hardcore awful for laughs like Preacher sometimes did.

There aren’t many women in the supporting cast beyond Monaghan’s one love interest – as I say, Ennis clearly wanted to ruminate on male comradeship here. Although to give the book some credit in this paragraph, the all-male crew of hitmen are not too uniformly white.

In short, yes, I loved this series, it was right up my grimly comic, urban-fantastic, Ennis-liking alley. Hitman was kinda ahead of its time – a talented writer/artist team telling their own stories against the backdrop of an established superhero universe, just a few years before the balance in mainstream comics shifted from following franchises/characters to individual creators. If it existed nowadays, it could well be a cult hit. Now that it’s finally back available, worth giving it a shot.