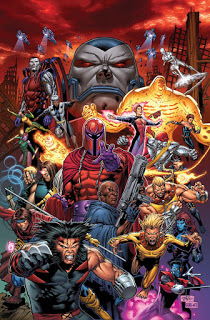 Just recently, I crossed another item off my list of stories to read on Marvel Unlimited – I rattled through the X-Men: Age of Apocalypse mini-epic. I don’t know what spurred me to go for that precise one, but after the fact, it seems topical – after all, Marvel are about to pull an Age of Apocalypse on their entire universe with the mega-massive Secret Wars event.

That’s before we get to next year’s X-Men: Apocalypse movie, which probably won’t adapt this storyline but might, and recent DC event Convergence, also an AoA-style move, albeit shorter.

So it seemed a good time to talk about it, maybe discuss how these new events are using (or abusing) the legacy of Age of Apocalypse. Spoilers follow for twenty-year-old X-Men comics! 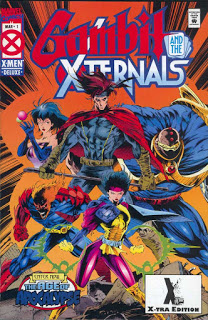 Style icons of the Age of Apocalypse

It turns out, Xavier was crucial to everything and the causation ripples from his non-existance caused the Marvel Universe to whip from a standard modern-day setting to a hellish dystopia ruled by longstanding Survival Of The Fittest X-Tyrant Apocalypse.

I’m going to try and keep the outline brief: Age of Apocalypse began after someone went back in time and killed X-Men mentor, inspiration and Patrick Stewart lookalike Charles Xavier, long before he became a living legend.

In real-world publishing terms, this meant the seven or eight monthly X-Men comics were replaced for four months with retitled series following the AoA equivalent of their regular characters. So Wolverine became Weapon X, Generation X became Generation Next, X Factor became Factor X, Excaliber became X-Calibre (???), and, best of all, X-Force became Gambit and the X-Ternals. Because they’re external to the mainstream, or something?

Some characters investigated signs that all wasn’t right with this reality, others fought in escalating conflicts that threatened to destroy the world before the first lot could save it. And that, basically, is the premise of Age of Apocalypse.

The Knightfall of Jack Batlin

This is far from the only superhero comics story in the nineties where a popular property was replaced with a different (often DARKER) version. There was Batman: Knightfall, the Death of Superman, Spider-Man’s Clone Saga, new Green Lantern Kyle Rayner and, of course, the time Daredevil faked his own death, wore black armour and started calling himself Jack Batlin.

Not got time to discuss all those in depth, but the point is: many of these stories are not well-remembered. Age of Apocalypse, however, gets quite a good rap. Like: people talk about it as if it’s good and worth reading, rather than a “guilty pleasure” or a fascinating study of nineties excess.

So, what did I think when experiencing these comics?

Honestly, if I take one thing away from Age of Apocalypse, it’s a certain respect for the editorial planning and world-building. The comics consistently take place within the same world, there’s a steady rumbling story through everything despite the dozen or so writers and artists involved. There aren’t that many moments of memorable writing voice – even an early-in-career Warren Ellis on X-Calibre doesn’t impose his style on the finished product much – but everyone is clearly on the same page.

It has a lot of momentum, the characters are consistent, it’s paced at just the right length to get everything in, do its thing and end the story with a bang. The art is always strong, clear and getting the desired effect, finding time for memorable showings from Joe Madueira, Steve Skroce, Adam & Andy Kubert and Chris Bachalo, among others.

Obviously, I wasn’t involved in running the Age of Apocalypse story, for all I know it was utter bloody chaos behind the scenes. But if I had to compare it to other nineties comics events, I would say this is the USP: it feels like a story at its natural length with a pre-planned beginning and middle, then an end which brings back the status quo without feeling like a depressing reset.

Infinite Leather Jackets and the Apocalypse

Of course, I can’t pretend that Age of Apocalypse is some formal comics masterwork on a par with Watchmen. It is an event story from the nineties and comes with all the try-hard “kewl” moments you’d expect, along with over-muscled men, over-endowed women, awful haircuts, too many guns, too many pockets and infinite leather jackets. If you’ve tried nineties comics before and found all the above too much to deal with, I can’t say Age of Apocalypse will necessarily change your mind.

As a pre-2000s comic, there’s also a narration-heavy, tell-don’t-show approach to storytelling that seems clunky compared to the streamlined dialogue-driven cinematic stylings of nowadays. With a whole universe to introduce, it can’t avoid a huge amount of info-dumping in captions, not to mention characters turning up and delivering huge monologues which just happen to explain their entire motivation and history in a single text-filled page.

Of course, even if it doesn’t read silky-smoothly, it’s possible this TAKE THIS EXPOSITION AND EAT IT! approach is one reason Age of Apocalypse works. Fully dramatising all of this background material could take twice as long, and even if it would be functionally better, stretching out the story would damage momentum. Let’s face it, fun though this alternate reality replacement game is, we all know the status is gonna quo in the end. Better focus on the key moments. 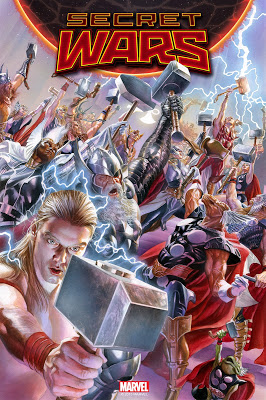 The Many Thors of Secret Wars

Which brings us on to the happening-right-now Secret Wars, in which a Massive Cosmic Event destroys the Marvel Comics universe and all its alternates, leaving only a patchwork reality made of bits from all of them. It’s very AoA in many ways, and not just because one of the themed regions on the new “Battleworld” is Age of Apocalypse-based. In fact, this is a bit like a theme park isn’t it?

But the main thrust is that the whole of the Marvel line of comics is on hold, bar a few exceptions, leaving only comics set on the various new worlds. Some of them are ‘continuations’, others are ‘preparing to die’ stories set back in the pre-destruction universe, others just writers having fun in the weird new setting without much concern for what it all means. Those might be the ones I’m most excited by, although as a Marvel Unlimited subscriber, I get to read any I fancy without needing to make “purchasing” decision.

Which, actually, might be the best way of experiencing the event.

I don’t know whether Secret Wars will work or not – I can see how it might be annoying to followers of ongoing series which are now being heavily disrupted due to a story which doesn’t relate to them. Age of Apocalypse, at least, was shorter, more self-contained and confined to a smaller group of books which were heavily interrelated anyway, so tight continuity wasn’t a hard pill to swallow. Will Secret Wars lack the tight focus and plotting that made Age of Apocalypse work? I’ll find out in about a year when the whole thing is on Unlimited.

But even if it turns out comics companies learnt the wrong lessons from Age of Apocalypse about what they need to do to sell, the original remains a fun read. A testament to how obvious gimmickery and a bombastic nineties aesthetic don’t have to be bad if there’s a compelling story in there. Worth a look.

FOOTNOTE *: Yes, I’m aware Darkdevil is an actual character from the alternate-future MC2 continuity. He’s the son of a Spider-Man clone possessed by the spirits of both Matt Murdock (aka Daredevil) and the demon Zarathos. In many ways, this innocuous pun was a homage to him.

Previous Post: « Hobson & Choi YouTube cameo round-up! See me abandon a copy of the book in a streetside shed!
Next Post: Five ways my book plans collapse upon contact with the real world – A Metaphorical Disaster Movie »