Many years ago, when I was about ten or eleven, I wrote a review of a book. If you follow this website, you know I often review, but on this occasion, I was critiquing to win the chance to judge the WH Smith Mind-Boggling Books Prize.

This was an award for children’s books with a gimmick – the judges were all aged between ten and twelve, so had authentic young-person opinions. I entered, using Microsoft Publisher to put an attractive border on my review and the title in bendy WordArt at the top of the page. The book in question was Redwall by Brian Jacques – a book which I already listed as big in my influences a few months back – and thanks to my advanced critical faculties, not to mention an amazing pun about walls painted red, I won!

Which meant I got to judge the prize, read a stack of books and enjoy more media attention than my tiny mind was ready for. Keep reading to discover how that went and see some frankly horrifying pictures of pre-teen Nick Bryan. I was cleaning out my old bedroom at my parents’ house the other day, you see, and stumbled upon a whole trove of this stuff.

Be Warned: there will be spoilers for the outcome of the 1995 Mind-Boggling Books Award.

“Okay, that’s it, now glare at me like you’re a disapproving librarian.” 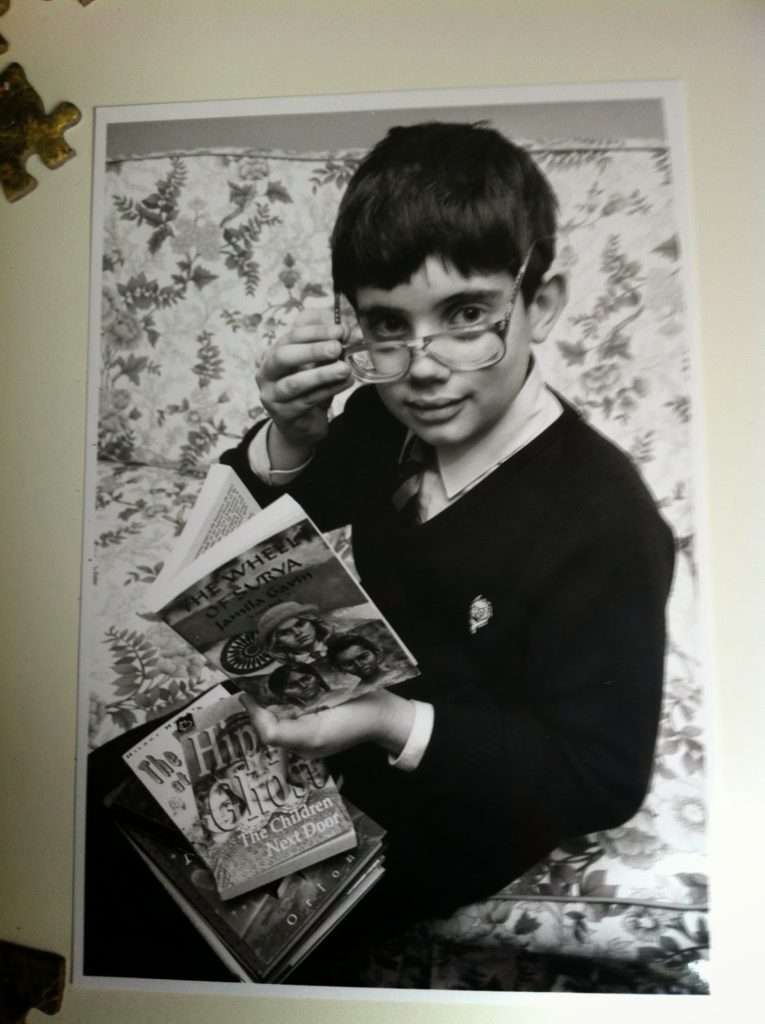 How am I keeping those books on my lap?

So, obviously, once I got confirmed as judge and accepted the challenge, they sent me the ten or twelve books involved. I had a few months to read them, which wasn’t that challenging for me as an overly bookish child.

Whenever I spoke to anyone about it, they all acted impressed at my ability to read “so many” books in “so little” time and I stared, baffled. Because, you know, it’s not a lot. Is it?

Obviously, I had limited empathy for adults at the time, so can now appreciate that that so many books in three months might look like a challenge, especially if they were long adult books and you had a job or writing side-project or both.

After the local newspaper found out that something interesting was happening in their area, they sent a man round to have a chat, ask the question I just described and photograph me in situ, seated on my Mum’s admirably seventies sofa. Not gonna lie, it was a painfully awkward experience, but I was in the newspaper! That more or less made up for everything.

Your eyes may have already wandered to the photograph from that shoot, in which I look like a geeky child asked to do a weird librarian pose by a stranger. Note also the fish crest jumper, which I wore all through primary school for no discernible reason. Our school badge wasn’t even a fish, I found the jumper at a boot sale.

“Your motivation in this one is Contemplative Philosopher.” 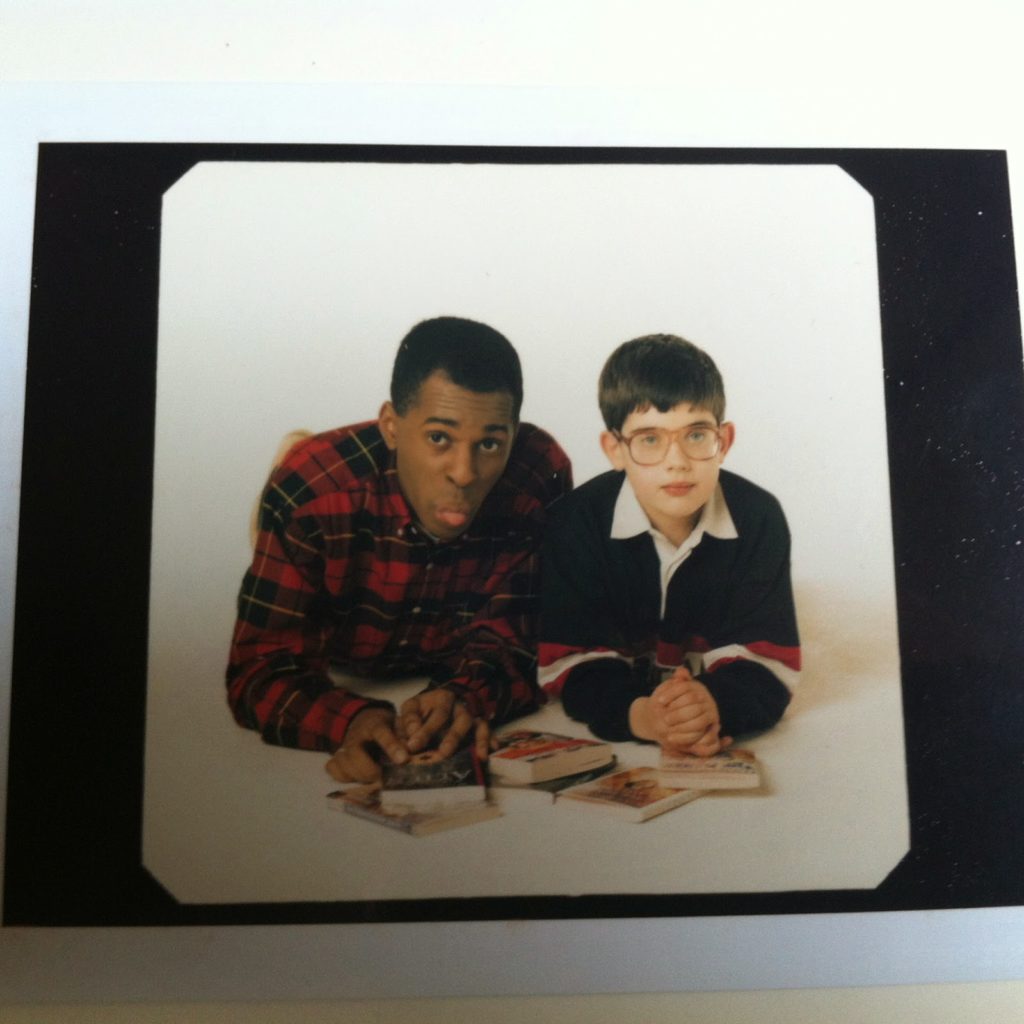 I am the one on the right.

And that wasn’t even the end of my media schedule! I appeared on BBC Essex, where they yet again asked me how I read so many books. I chatted to a DJ, got his autograph in my tiny red book which he insisted on signing live on air. Residents of my village were mega-excited to hear me coming out of their car radios. Good conversation-starter at cub scouts.

I also got photographed with the other judges, the result appeared in both the Funday Times (not a typo, it was the children’s supplement) and the Radio Times. It’s basically all of us standing in a couple of rows like we’re in a school photo, flanked by Toby Anstis and Andi Peters in place of teachers.

Messrs Peters and Anstis were presenting the Children’s BBC broom cupboard at the time, which I watched a lot, so I struggled to keep my cool whilst being polaroided with Andi Peters. Results as pictured – I may have overcompensated a tad. He didn’t ask me how I read so many books, obviously, because he was a dude.

At last, I went to the Mind Boggling Books award ceremony, where I watched respected author and previous-year’s winner Malorie Blackman present the prize to the winning author. And then the judges got a tour of the Natural History Museum, but not me because I was sick that day and barely kept it together long enough to see the presentation itself. Let down by my feeble human frame again. I found a photo from that day too, but I’m not going to post it on the internet because I look like I’m about to die.

But what about the actual books, Nick? 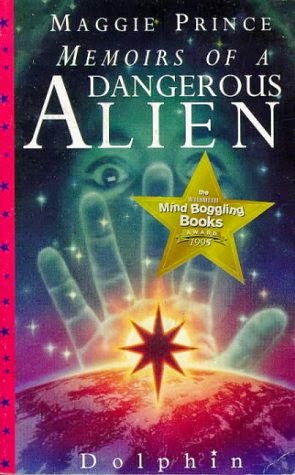 Note how the yellow star logo blends seamlessly into the other stars.

I’ll be honest, I’ve read a lot of books both before and since I judged the Mind-Boggling Books prize, so my memory of these specific volumes is a little spotty. Probably can’t reproduce my exact critical opinions on every single one. I’m sorry if I’m letting down the book blogger community, but I was ten.

However, my favourite book of the lot was Confessions Of A Dangerous Alien by Maggie Prince, and that was the one that went on to win the prize! For once, my voice counted in democracy!

I remember clearly enjoying its weird ambition and identifiable characters, even if I couldn’t tell you for the life of me what it was about without Googling. Brilliantly, it has a page on Goodreads and the default cover image on that site (reproduced to left) features the Mind Boggling Books logo, so everything I did mattered!

Even better – the PR guys sent me a free copy of the sequel after the book won. They left it a bit late to send their bribe through, but I appreciated it nonetheless.

So that was the winning book. Let’s finish the post talking about that, rather than the weird pre-teen squirm of my early media appearances.

If you want to reward my youthful commitments to literature (or just be entertained), I have some dark-comedy London crime novels out and you can buy them on various platforms (including real physical books!) if you want. First one cheap on digital!