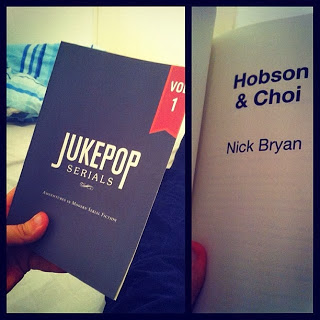 Those of you who see my updates on any form of social media are probably familiar with the photograph on the right of me (and my thumb) in the Jukepop Serials anthology, as I posted it more or less everywhere on Tuesday night.

Now, for anyone who fancies some context, here it is: Jukepop Serials, the publishers of Hobson & Choi, have produced a print collection of their ten “best” serials.

I have no idea what magical algorithms were used to reach this list, but nonetheless, I was on it, and the first five chapters of Hobson & Choi can now be found on pages 43-68 of the book. I stress, these are not improved or “director’s cut” versions, so if you’re not a H&C completist (do we have those yet?), you don’t have to rush out and buy it, but if you want a Christmas present for someone who enjoys serialised genre fiction, this could work.

Whatever the algorithm, they’ve ended up choosing some good stories. No, this isn’t a published novel, but at this early point in my writing career, part of my brain still spikes with joy whenever I see my own name in print, so good fun nonetheless.

Elsewhere in Nick In Anthologies news, the comic script I was working on last week had its first encounter with a genuine editor, and happily all went well. Got interesting notes, no spelling mistakes found. In short, I didn’t get an email back saying “What in the good fuck is this, have you even read a comic?”, so good result. Next, this afternoon in fact, I shall go sit in my cafe and attempt to enact said notes.

In short, it’s been a good few days on the writing, so you’re spared the stream of introspection that sometimes emerges in these posts. There may or may not be another WriteBlog next week, because my schedule of festive prep/booze is starting to squeeze the writing time. In fact, we’re reaching the calendar point where bloggers everywhere pad out their schedule with Best of [YEAR] lists, so might do that instead. Regardless, hope your own Christmas shopping and/or drinking is going well.