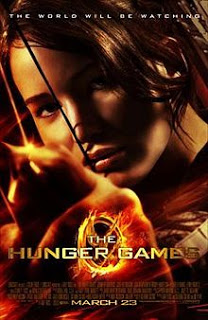 I saw the film adaptation of The Hunger Games over the weekend, having read the book six months ago. A very topical choice, as the publicity is just revving up for the November release of the second movie.

So, how was the adaptation? What interesting choices did they make? Did I enjoy it? All that and more!

(Note on spoilers: there will be some.)

The original Hunger Games novel was largely written in first person, and it works nicely for the main action: it’s a load of survival violence in a wooded area, and the desperation and ingenuity of Katniss is well-portrayed by her breathless internal monologue.

Obviously, that’s tricky with a film, but to their credit, they make a real effort to recapture it here. The wordless storytelling on display during the Games sequence is impressive, even if it does mean large chunks of this film you can’t easily watch whilst checking Twitter.

And the rest of the time, they cut to the news coverage or control room to give us exposition – about what the hell a Tracker Jacker is, for example. ( I assume not just me who started singing Tracker Jacker to the tune of Swagger Jagger there?) But they never stick with the outside characters long enough to take the focus off Katniss.

Yes, a few bits are cut: for example, not many of the Games players, beyond heroes Katniss and Peeta, get much development, but there’s only so much a filmmaker can do. Ultimately, like many reasonably faithful book adaptations, they’ve kept to the spirit of it, but if you want more detail, you can always read the book.

One omission that did slightly disappoint me: the violence. The Hunger Games in novel form was surprisingly visceral and unpleasant for a teen-targeted book, but the screen version sticks to very clean, off-screen or weirdly bloodless death. A few shots of flesh wounds and that’s about it.

This may make me sound like a monster hungry for blood, but I felt one thing the book did well was showing us horrific real life violence rather than a clean video game, and the film comes close to going back the other way. Still, the reactions of the actors (especially the excellent Jennifer Lawrence) do a lot to sell the horror.

Obviously, the filmmakers wanted their 12 certificate – although I gather a 15-cert “uncut” edition is available and the differences are tiny. Nonetheless, aside from that one issue of commercial reality, they realise the world nicely – I hate Gale, but I hated him in the books too. Good film, looking forward to the sequel.