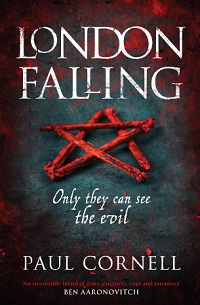 Today’s book review is London Falling by Paul Cornell – a writer I already liked for his excellent Captain Britain And MI13 comics, as well as the Human Nature two-parter on Doctor Who, one of my favourite David Tennant episodes.

So I had expectations of London Falling, described in the authorial blurb as his “first urban fantasy novel”. It’s the beginning of a mooted Shadow Police series, introducing a team of enjoyably grounded police folk, who find themselves thrust into the messy world of supernatural evil lurking beneath the surface of the one they already knew.

The big selling point here, for me, was not the fantasy stuff but the air of realism – Cornell has done his research to give us a plausible glimpse into the life of UK police. There’s a nice balance between the driven-for-justice fictional lawman and more complicated characters, who struggle with personal demons even before the literal ones turn up.

Which brought me to another realisation: I would happily read a completely straight realistic crime novel by Cornell about these characters. Having said that, his take on how the police try to bring the weird shit down to their level is very logical and intriguing.

He balances his ensemble cast and their multiple perspectives deftly as well, which shouldn’t surprise those of us who read Captain Britain.

Interesting to note from the acknowledgments at the back that this was once developed as a TV idea – I can see how it would’ve worked on-screen, maybe one day it still will, but I think Cornell is able to do some more interesting things with the magic imagery here, sequences that would be a struggle to visualise effectively. (Especially on a BBC budget, it has to be said.)

Oh, there is a big reveal towards the end which was guessable quite a while earlier. I’m curious how intentional that was – if it was meant to be a jawdropping surprise from nowhere, didn’t quite work, but perhaps Cornell was fully aware some would get it.

Anyway, another TV-like quality: it’s clearly setting up the Shadow Police elements for a series, and happily, the sequel sounds like it’s definitely happening. I admit, I won this book in a competition on the generous Bleeding Cool blog, but I’ll be spending hard cash on the follow-up. If you want a thoughtful, grounded take on supernatural cops, London Falling is definitely worth a read.