I imagine few have heard of Quantum & Woody, a comic book published in the 1990s (not a time known for great comics, I grant you) by Acclaim Comics. Q&W was pretty obscure even when coming out, and so it remains. It barely even exists on UK Amazon.

Nonetheless, that damn comic has been a huge influence on my stuff, in terms of both character and story structure. (In terms of actual prose, yes, I had to read some books.) So I’m going to talk about it a little.

Eric Henderson and Woodrew Van Chelton were childhood friends who drifted apart. They’re reunited when their fathers, who were working on a Mysterious Comic Book Science project together, die suddenly. Eric is now a serious man with a serious life, whereas Woody is a slacker whose band is going nowhere, but they try to investigate nonetheless, squabbling all the way. Inevitably, they are caught in a Mysterious Comic Book Science accident.

Thereafter, they have to meet up and touch wristbands every 24 hours, otherwise they both die, but in return, they get superpowers. Eric fancies himself as a proper superhero, and has the money to go through with it. Stuck near Eric thanks to the wristband dependency, Woody joins in to annoy him. 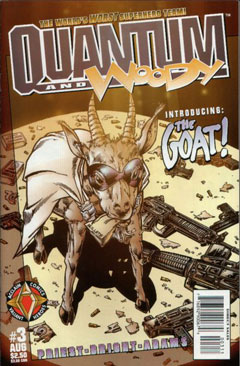 If this sounds like a mismatched buddy cop movie, only with superheroes… well, you’re not wrong. But it’s also a surprisingly subtle story about a long-standing friendship, the misdirected resentment between the two of them, along with the genuine affection beneath it. Oh, and the humour is mostly funny, in a broad sitcom kinda way.

The storyline where they switch bodies and have to face the prospect of peeing using each other’s genitalia is a watershed moment. It helps that Mark Bright, like all great comic artists, can do emotion and comic timing as well as people punching each other.

In retrospect, this series influenced me more than I even knew. My stories love thick-and-thin friendships, straight man/funny guy duos, out of sequence storytelling (seriously, “linear plot” is a dirty word in Q&W, especially early on), inane farm animal mascots (they had a goat, see image) and wry smartarse humour. Especially wry smartarse toilet humour.

Alas, the comic has been so lost in time that the odds of you reading it are quite small. If you know me in real life and are intrigued, I can dig out the four collected editions reprinting issues #1-16. For anyone else trying to track it down (good luck!) – get #1-16 and you’ll have a beginning, middle and end. Subsequent issues are also good, but the series was cancelled mid-storyline with #21, so you may experience frustration.

Writer Christopher Priest talks a little about Quantum & Woody here. He’s a very talented guy who’s worked on other good comics too (although Q&W will always be first in my heart), so it’s sad that he isn’t active in the field nowadays. A new company, Valiant, took possession of all character rights after Acclaim went bust, so maybe they could relaunch Q&W – if Priest is there, so am I. If he isn’t, I kinda feel the point is gone. And if they can get Bright back on art, even better.

This is the problem with following US comics not published by the big two, Marvel and DC. Even when they have superheroic elements in them. It’s a constant struggle for survival and they keep disappearing. But Quantum & Woody, even if it never returns or gets reprinted again, was a clever, warm, funny work, and I thought it deserved a note here. It was one of the first things I really took on board, and yes, I may view it with somewhat rosetinted glasses, but it’s still worthy of at least a look. Did anyone else read this? Just me?