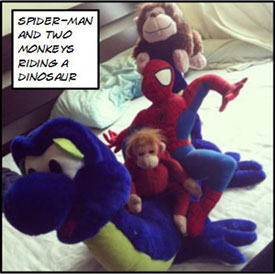 For every craft, there is an easy shortcut. In cooking, you can just add salt. In fashion, just wear black. In warfare, just launch a nuclear weapon.

And also in storytelling, you can just throw in vampires, zombies, pirates, monkeys, cowboys, aliens, wizards or one of the other big tropes. I’m not saying these things always suck (vampire joke), but I am weary of them being used as a substitute for new ideas.

And, quite possibly, so are other people, as I haven’t noticed as many new books in which the entire premise appears to be “Established plot with added vampires/cowboys/zombies” (“Pride and Prejudice… With Leopards!”). Not to mention the movie “Cowboys Vs Aliens”, wherein the entire film was right there in the title to imagine.

I can’t directly criticise that movie, as I haven’t seen it, but that’s because I read the title and thought “Well, I know what that’ll be like,” saw a trailer which echoed those feelings, and then ignored it happily. A rush of positive reviews might have changed my mind, but they never came.

The problem with these genres mashes, or pointlessly bashing big genre concepts into your story, is dilution. It automatically cheapens whatever your point was, and it’s probably won’t be a masterful take on cowboys/monkeys/whatever either.

Recently, Twilight (love it or hate it) has been successful in the vampire gothic romance area, while Walking Dead has raked in the zombie money. What do those two have in common, beyond  attractive British leading men in screen adaptations? They’re both pretty straight approaches to their chosen area. No genre-bendng or random insertion of aliens.

As ever, I’m doing heavy generalising here. Obviously, sometimes genre-mashing has produced interesting, clever works. I enjoyed Sean of the Dead just as much as you did, but that was deceptively carefully done and affectionate. If you’re going to randomly deploy a huge monkey into your novel, beware the risk of laziness. The fact you’re using a pre-made concept doesn’t mean you don’t have to consider the meaning and motivation of the gorilla and give it a firm reason to exist beyond “monkeys are cool”.