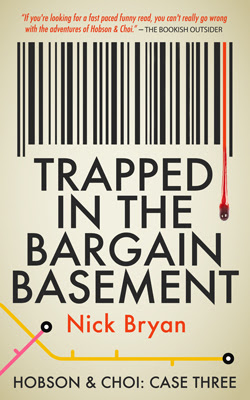 So. In the not-too-distant future, the first case of Hobson & Choi, my mismatched detective duo London crime series with a darkly comic tone, will be self-publishing. I have a nice cover, a sales blurb-type-thing, a new title, a release date, and I am about to declare all of those things.

Exciting stuff. Probably best to just get on with it. First up, then, is the real meat: cover and blurb time.

The Girl Who Tweeted Wolf 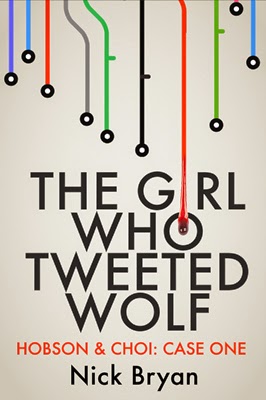 With both follower and body counts rising, can they crack the case without offending everyone or being eaten by a huge dog?The Girl Who Tweeted Wolf is the first case starring Hobson & Choi, a bickering, mismatched detective duo for 21st century London. This book collects the debut storyline of the hit darkly comic crime web serial, extensively rewritten and improved for this definitive edition.

So, that’s the what. Next important bit of news, I suppose, is when: The Girl Who Tweeted Wolf will be out on Tuesday July 22nd 2014 in electronic formats. It might take a day or two to get through to all of them, but I’m aiming to be up on Amazon, Nook, Kobo, iBooks and whatever else Smashwords will punt me onto.

For print users, there is a standard paper edition coming in August just as soon as I’ve finished back-and-forthing with proofs. Rest assured, I’ll try my best to make a big deal out of that too.

If you want to get involved now, The Girl Who Tweeted Wolf is up on Goodreads so you can add it to your to-read list and such. Also, if you have a book-review blog or enjoy posting reviews on Amazon/Goodreads/anywhere else book reviews are posted (or both of the above), email me and I may be able to sort out a proof e-copy of the book for consideration in truthful review.

In a similar vein, if you have a blog/other outlet and want to get even more involved, I am well up for talking about the release anywhere that will have me. For discussion of guest posts etc, just email me. I’m sure we can work out some kind of fair arrangement.

And if you want some new H&C material right the hell now, you can still get a complete two-thousand word done-in-one (not part of this book, an entirely standalone new thing) by signing up to my mailing list here or via the form which should appear in the right sidebar of this blog. This will, as you may have guessed, guarantee you an email when I publish The Girl Who Tweeted Wolf.

That’s probably it for now – if I’ve missed any crucial details, let me know in whatever medium pleases you. For now, let’s just take another look at the cover in attractive 3D-rendered form. Thanks to Design For Writers for their lovely work on the actual design, by the way – do contact them if you need anything similar, they’re good.