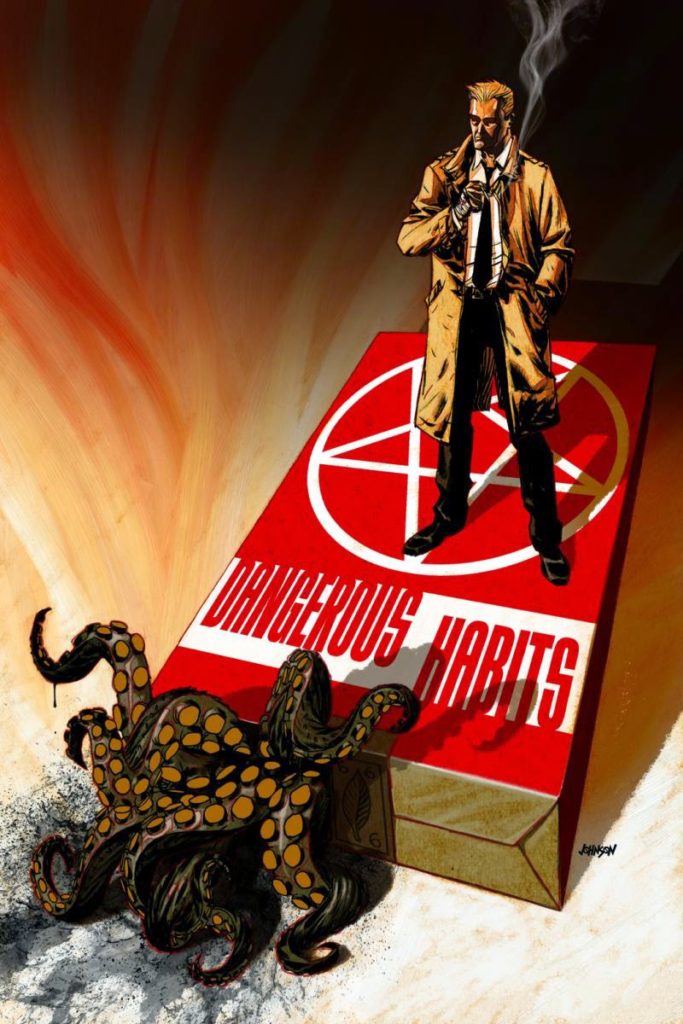 Inspired by the launch of that Constantine TV show, Comixology recently held a generous sale on Hellblazer, the original for-mature-readers John Constantine series. I took this opportunity to finally read in order the entire Garth Ennis-written run on that title, the work that broke Ennis into American comics and first teamed him with Steve Dillon, with whom he’d later create Preacher.

For the uninitiated – Hellblazer is a horror comic about John Constantine, trenchcoated modern-day wizard antihero, confronting supernatural/magical unpleasatness in a modern setting. He was created during Alan Moore’s Swamp Thing stories, before spinning off into own series after fans enjoyed his manipulative schemes and wry British comments.

Hellblazer distinguished itself from other urban fantasy via particular emphasis on straight-up awful horrific moments and a tendency to reference real modern-day British issues rather than just the affairs of its own fictional universe, all of which made it a massive cult hit.

Long time ago, when we were young…

Now – I’ve only read Ennis’ run in segmented chunks before, mostly due to DC/Vertigo’s until-recently-quite-shitty approach to reprinting Hellblazer. The original issues came way before every single comic book got a collected edition as a matter of course, but thanks to Ennis/Dillon’s later success, there was a half-arsed attempt to collect this early collaboration. Sadly, these had no helpful volume numbering and an annoying habit of skipping non-Dillon issues.

I, meanwhile, was a teenager in a suburban-Essex library where neither Google nor Wikipedia had emerged yet. Not a chance in hell(blazer). But DC have, at last, started collecting early Hellblazer in easy-to-follow numbered volumes. On the down side, they’ve cancelled the monthly comic and relaunched it as the no-longer-so-horrific all-ages Constantine series, but… y’know, it’s something. 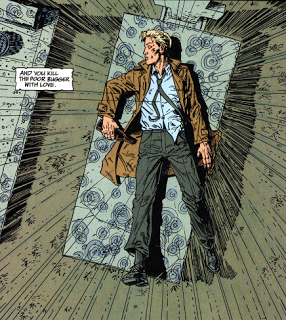 Not getting into big spoilers, the ongoing storylines of Garth Ennis’ Hellblazer hinge on two points:

As is the joy of monthly comics, there are a lot of diversions into horror vignettes along the way. Still, the Ennis run broadly reads as one big novel covering those two interweaving stories. Scattered references to past Hellblazer storylines, but you can basically read it as a complete unit in itself. It’s fine. God knows I only knew the bare-bones basics when I started, and I’ve still not read that much other Hellblazer now.

I first kinda-sorta read chunks of this run in my late teens, and re-reading it now, a lot of it came lumbering out of my past recollections. I didn’t realise to what extent I’d half-absorbed it, nor how much I’d failed to understand some of the broader themes – especially the many references to political and social issues of the time.

I’ll be the first to admit, I’m still not shit-hot on the tensions of 80s-90s Britain, but the ideas about race and class in these Hellblazer issues shot straight over never-left-suburbia teenage Nick’s head. Good to see all this time reading liberal Twitter has changed something in me. 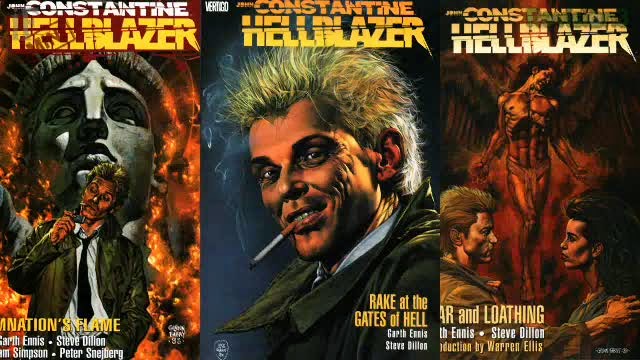 It’s interesting reading this as an early Garth Ennis work, spotting some of the tools he’d later become extremely known for – pontifications on self-destruction and the effects of extreme actions; the enduring nature of male friendship; crowbarring a war story into an unrelated plot; creating strong and likable relationships, then putting them under extreme pressure.

It also features a predilection towards demons delivering rather long, ponderous and flowery monologues, a tendency Ennis thankfully dialled down in later works – Preacher, in particular, featured a lot of heavenly beings, but less of their unvarnished soliloquies. 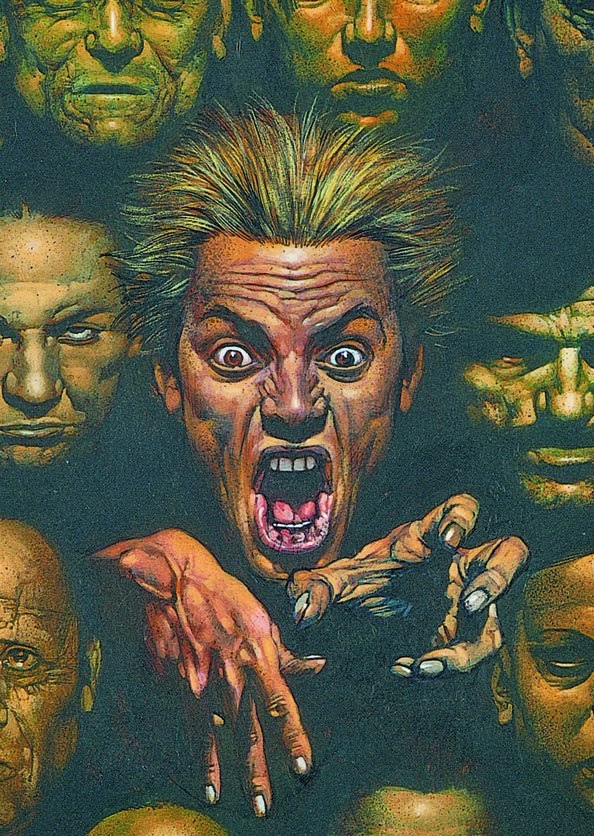 Also, it’s so easy to think of Hellblazer as a forerunner to other tortured urban fantasy antiheroes, you forget how much more genuine horror there was, how many times Constantine was faced with magic not just as a vague swirly force, but a really on-the-nose, awful esclation of something wrong with the real world. There’s not as much extrapolating through metaphor, far less excuse to think, actually, this isn’t really happening. Because a lot of it clearly is, and that’s when this book really works. The visceral stuff.

Ennis was, I gather, pretty young when he wrote this, and he’s definitely youthfully angry about some stuff. Another character type Ennis always writes well, and often applies to the many forces that displease him: idiots bringing about their own doom.

I’m a sucker for Dillon’s art after growing up on Preacher, and he’s great for this kind of stuff, creating a grounded real world around Constantine – a plausibility that only makes it more brutal when fucking horrible magic hits home. William Simpson, the other main artist involved, is excellent too – his work carries a washed-out, ghostly feel, bringing out the End-Of-The-Line-Mate sense permeating Dangerous Habits.

Don’t get me wrong, this isn’t all a grim journey into the heart of darkness – yes, things inevitably get bad before the big showdown, but before that, in order to make us care about JC and chums, there’s a lot of real human warmth in there. Yet another Ennis trick – writing dialogue that actually feels like human conversation rather than… well, like dialogue. Look, here’s John talking to a rabbit. 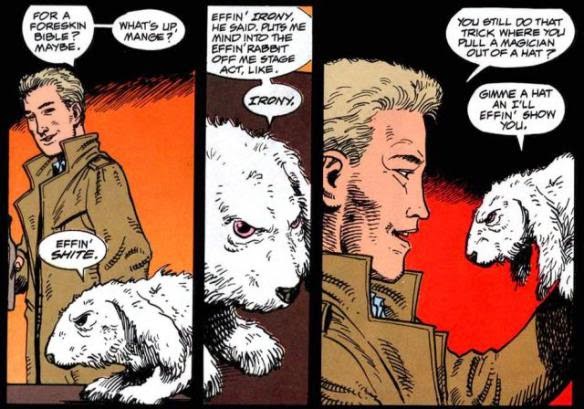 Whereas today, on the other hand… 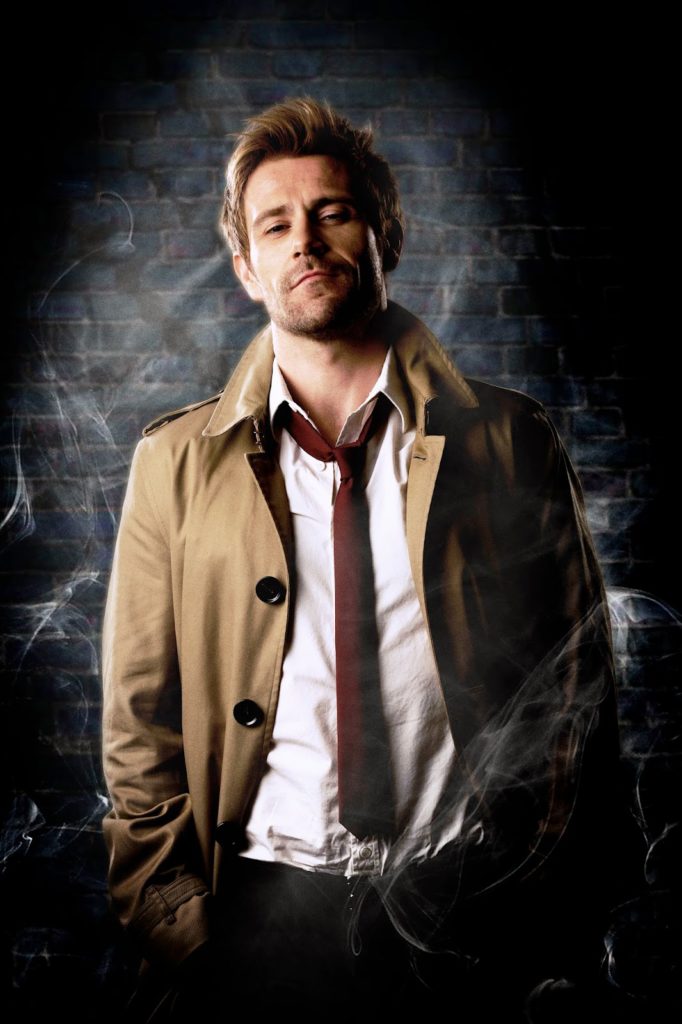 The weirdest part about reading this book again, to be honest, is realising how much it’s influenced me. Much like when I revisited Quantum & Woody a while back, this is a series that got to me young, even if always as a supplement to Preacher, and a lot of the lingering regret and tone of world-weariness does come up in my work. I look at John Hobson (of Hobson & Choi fame) after this re-read and think, actually, there’s a bit of the Ennis Constantine in there. Only without the magic, obviously.

I’m also following the Constantine TV show, and I think one reason old-school Constantine fans aren’t all taking to it is a lack of the two points I mentioned that distinguish Hellblazer from standard urban fantasy: genuine horror and real world relevance. But on its own merits, it’s a reasonably entertaining pulpy supernatural antihero show, helped along by Matt Ryan being quite good as John himself (even if other characters can be a bit flat).

That, in summation, is every thought I had after re-reading the Garth Ennis Hellblazer run. Hope you enjoyed the piece. Do check out the comics in question if they sound appealing – they genuinely are quite good. The Ennis stuff is Hellblazer #41-83 plus a few specials, or volume 5-8 of the recent collected editions (only the last six issues of book 5 are by Ennis).

And if the comparisons with Constantine make you want to buy the first book in my Hobson & Choi series, I won’t discourage you from doing that either.Now, I might even try reading some other Hellblazer some time.