And now, a change of pace: a blog not about NaNoWriMo. About six blogs ago, I wrote about a bunch of short pitches I was putting together for some comic stories. Well, while I busied myself with bashing out a novel-third in Nov, I also heard that two of those had been accepted. So, yes, if all goes well, two shorts by me will appear in GreyHaven anthologies in the future. Good times.

Now, since I only had to write paragraph-long summaries originally, this news also means I must now write the scripts for both these stories. So, that’s been my project since NaNo finished. How’s that gone?

I haven’t written any comic script since my failed Script Frenzy effort of 2012 (Remember Script Frenzy? Remember the awful portmanteau “screnzy” which used to send a shiver up my spine?) so these muscles have needed to creak back into life. I’ve read a lot of comics lately at least, so remember how the storytelling works, but describing stuff? In detail? To an actual collaborator? New territory.

Lots of words no-one will ever get to read. Lots of trying to get across what needs to be there without imposing too hard on the artist’s freedom to do something interesting with the page. Lots of reading comic scripts and script notes by comics writers online to see if it helps. I don’t yet know who the artists will be, so I’m trying to make the script as everyone-friendly as possible.

Trying to also avoid the rookie comics writer’s mistake of overloading panels with text, because even if it seems like nothing to me on the script, count up the words and compare them to an existing comics panel and I suddenly realise that, yeah, put those bad boys down in word balloons and the art may as well be a blank space. Which, at least, saves a lot of work by the artist.

So, hard work, new skills. Nonetheless, I still love comics as an art form and the idea of seeing my stories in arted and printed form makes it all seem worthwhile. So I’ve gotta finish the first one, start the second one… maybe buy some Christmas presents or something too? It’s strange new territory, but after burning the candle at both ends prose-wise during NaNo, it’s kinda nice to be working in this different structure for a while. 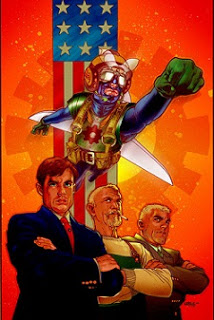 Ex Machina is a comic book about a superhero. Well, a past-tense superhero – comic fan and civil engineer Mitchell Hundred gained the power to control machines, and embarked on a brief superhero career as The Great Machine, before jacking it in and running for Mayor of New York, believing he could do more good that way.

The series itself, by Brian K. Vaughan and Tony Harris, starts off with Hundred sitting alone in the dark offering to tell the story of his four years in office, with one warning: “It may look like a comic book, but it’s really a tragedy.”

Not that I’ll be spoiling the ending, but I’m just saying: it lives up to the tease. Oh, and if you can read the whole series without looking at spoilers, it’s definitely worth doing.

The comic began in 2004, and ran through for fifty issues to a pre-planned conclusion – I read the first few collected editions around the time they came out, then slacked off comics for a while. After Vaughan recently returned to prominence with Saga, a new sci-fi series drawn by Fiona Staples, I decided to finish it off.

The execution of Ex Machina is aptly mechanical – Vaughan’s work always brings the feel of having real thought behind it, from detailed character backgrounds to universe-building, as well as the clear research that’s gone into the political scenarios. (So much research that the characters can’t stop spilling factoids.)

But honestly, it’s the tragic spiral of Mitchell Hundred that’s both most compelling and most difficult to read. As witnessed by the recent success of Breaking Bad, everyone loves a good epic tragedy – watching a character you both love and hate plunge down a horrible rabbithole of their own making is hard to look away from.

Ex Machina might not be entirely perfect – meanders a bit in the middle, slight habit of forgetting supporting cast members until they suddenly become important, – but particularly when read quickly as a whole story, rather than small chunks, these things don’t register as much.

The art is a big part of the success as well; Harris’s photo-realistic style makes it easy to take Mitchell Hundred’s human struggles seriously, even though he has multiple flashbacks to dressing in a silly costume. Said style can vary a lot, sometimes between issues, but it’s never less than lovely

.In short, if you enjoy the big-name mature reader comic sagas like Preacher or Transmetropolitan, I think Ex Machina has earned its place on that list. Maybe it’s not taken as seriously due to the superhero elements, I don’t know, but it’s a great, thoughtful comic. Now, I really need to check out Saga. 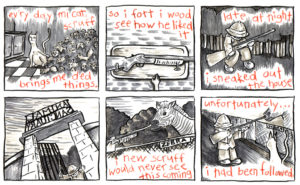 A short comic, written by me and drawn by the very talented Aaron Bir. Also up in the free comics section.