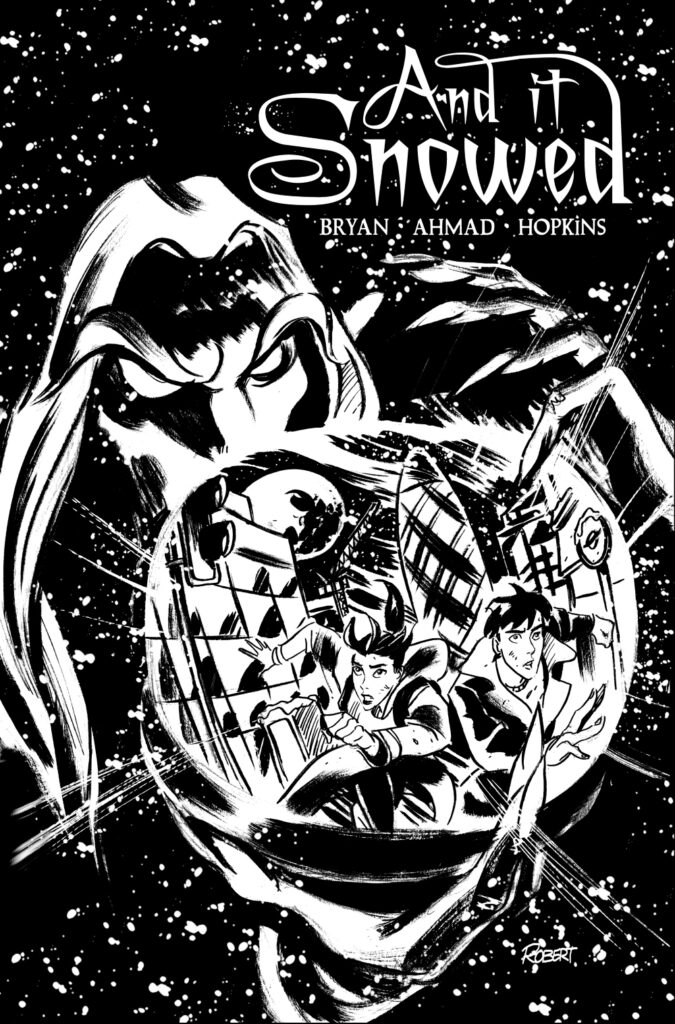 So, crawling back to the blog from the pandemic wreckage to announce that I’m doing a Kickstarter for my new comic! Starting on September 1st!

The new one is called And It Snowed, it’s a crime/magic fable with my good collaboratory buddies Robert Ahmad (of The Catalyst) and DC Hopkins (of Moonframe).

What’s it actually about? Well, picture the scene…

Ever walked home at night in the snow, long past the last bus, wrapped up in cold and loneliness? Staring up at the sky, wishing you’d gone home earlier as you trudge your way through slush?

Sam and her brother Luke are out too late in London, caught between a rock and a cold place. On one side, a loan shark demanding they repay their debt by stealing a magical artefact. On the other, the icy fury of its original owner – Jack Frost himself.

Scrambling away into the night, they find themselves prey in a desperate chase, caught in a hellish supernatural snowstorm.

A chill hit the air, a hulking figure emerged —

I had two main goals with And It Snowed – first, to capture my own experiences trudging across London on a snowy night – the endless, sometimes unsettling loneliness of it. Secondly, to play to Robert’s amazing ability to draw haunting noir-ish storybook cityscapes. I’m thrilled with the outcome on both counts.

I’m also marking this as the end of my trilogy of black and white one-shots, along with Little Deaths of Watson Tower and Moonframe, and I think it’s a fitting, fast-paced, emotional end to this phase of my comics self-publishing. So, yeah, I’m throwing this as a small celebration.

In short – next week, we kickstart, at this web address: https://www.kickstarter.com/projects/nickbryan/and-it-snowed

You can go there now and register for notifications, and some of the rewards are limited – we’ve got original pages from the new comic, and commissions from not just one but all three trilogy artists – Rosie Alexander, Lucas Peverill and, of course, Robert.

It’s gonna be fun, I hope. If you go right there on the launch date and help us roll through the funding goal quickly, you can get me to the fun stage a lot quicker. Hope you’ll join us, I’m terrified, but also keen to get going.

Here’s another link to the Kickstarter. Get involved. 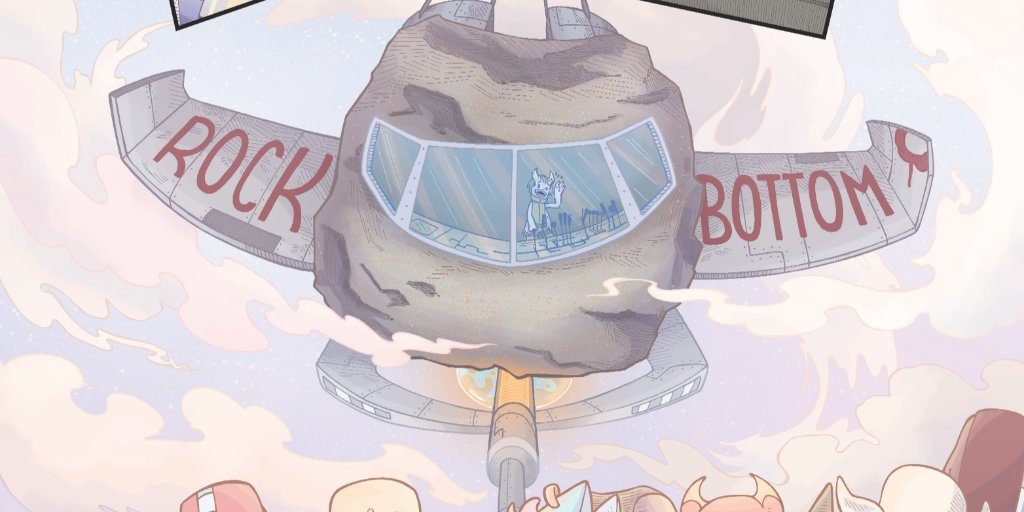 Coming deceptively soon to Kickstarter – new me-written comics one-shot Worrywart, a fantasy-goblin-orc action story about the struggles of living up to your supervillain mother’s expectations and getting by in a hellish dystopia.

I first dropped news of this comic’s existence a couple of weeks back, along with some spiky demon designs by artist Ryan Foust.

Ryan’s pressing on with the drawing, so seemed a good time to introduce our next member of the team – Lettersquids on, well, letters.

Very excited by this – he’s worked on a lot of the one-pagers I wrote for The Comic Jam, including this early team-up with Ryan, along with classics such as the weird horse-cowboy one, the elderly Batman one, the cute-yet-disgusting Halloween special and this dead-serious Roman conspiracy theory.

As you can see just from those, Lettersquids always brings a lot to the words and I’m looking forward to seeing what he does for the demons of Worrywart.

For a small preview, here’s the excellent logo he’s designed for the project, with all the orc-tastic flourishes you’d want – plus a few panels of Ryan Foust’s uncoloured art from the first page.

So far, we’re at the cute early stages of demonic development. Adulthood will come all too quickly.

But for now, since Ryan posted it on Twitter, here’s another art preview, just as adorable as the last.

I mean how cute is this little guy??? #Worrywart coming soon(ish) from me and ⁦@NickMB⁩ pic.twitter.com/WhMViEtGvV

In the course of 2018, I wrote (and endlessly re-drafted) the scripts for three standalone one-shot comics. The first of these was The Little Deaths of Watson Tower, which came out in October and seemed to go over well. I won't list every  reaction, as that's what my Twitter is for, but ending the year by placing #48 on Pipedream's indie comics top 100 list was a lovely capstone.

Anyway, that comic is still available, but I've now got the second one ready to go and it is called... 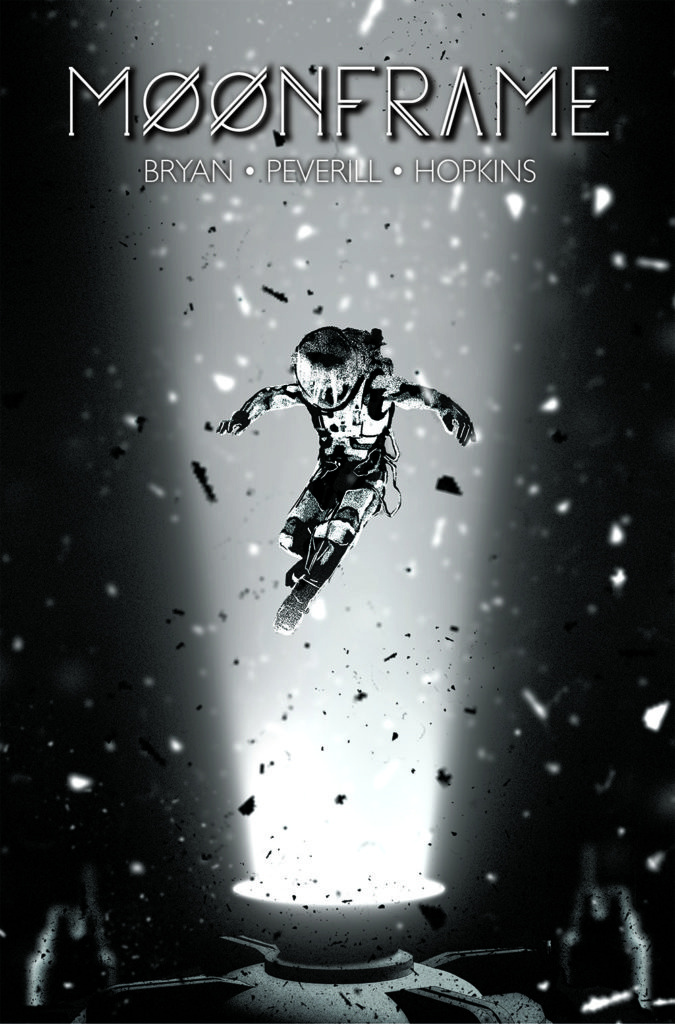 In the near future, the moon has been pressed into service as a warehouse for the vast data archive created by our constant internet use.

But now those billions of cat memes come under threat from a computer virus. Two astronauts must travel through this strange landscape to save them, completely alone apart from the passing thoughts of everyone.

For anyone interested in reviewing the book, you can email me at nick@nickbryan.com.

The comic debuts at the True Believers convention on February 2nd 2019, marking my first ever table selling at a comic convention. So if you're around Cheltenham that weekend and fancy buying some stuff, come on along.

And for anyone not in Cheltenham, it'll be on sale on my Gumroad shop in print and digital forms as soon as I get back from True Believers and press the go button.

If you want to see how convention prep is going, here is a sweet picture of me preparing my sales pitch. (And for anyone curious about the third of those one-shot scripts, you can see an art snippet by Robert Ahmad on the left of that banner.) 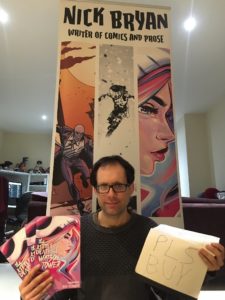 Exciting news, universe! Mere days after my announcement post (as the printers were very quick), you can now buy The Little Deaths of Watson Tower, a new standalone comic written by me and drawn by the sensational Rosie Alexander! 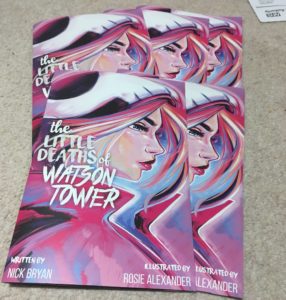 If you want to see more info about the comic, there’s a dedicated page on the site with some talk, a bigger cover image and a three-page preview of the excellent interior art.

Or, if you’re the sort of good, nay, great person who buys all my stuff cos you know you’ll like it, you can go straight to Gumroad to buy the PDF, or also the print edition pictured to the right!

As I said in the other post, we’d love you to get this spooky bit of skeletal comics in time for Halloween, but if you want the print edition by then, we’d recommend ordering pretty soon.

If you’ve any interest in reviewing/covering the book somewhere, or stocking it in your shop, do get in touch! Either via one of my many social medias if you have them, or email nick@nickbryan.com!

So, to my lasting excitement and terror, my first full-length comic as writer is on the verge of happening.

This is The Little Deaths of Watson Tower, illustrated by Rosie Alexander, and you probably know that already, because your eyes went straight to Rosie’s gorgeous cover below rather than reading this blurb first. 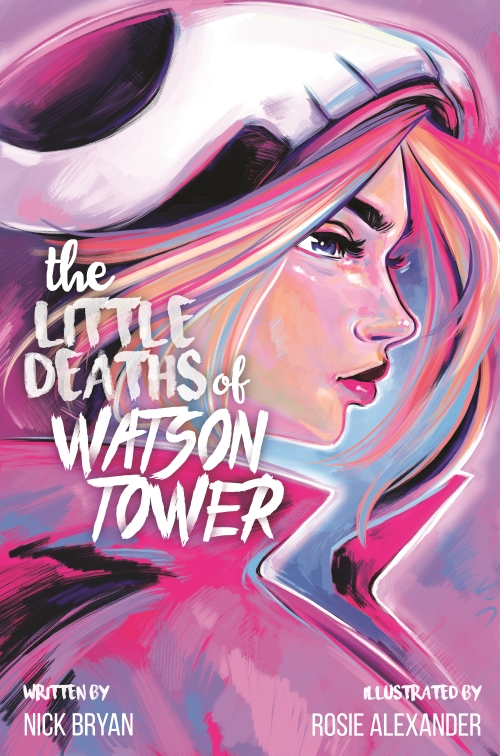 This is a fun, slightly strange comic about a bunch of kids dealing with death, skeletons, and the great unknown. It’s funny, sad and curiously uplifting.

All of which is enabled by Rosie’s art, which is luscious, evocative work and sells the comedy and emotion every bit as well as it does the ghoulish antics. She’s definitely going places, and I’m thrilled to have joined in at this early stage.

Here’s the first couple of panels… 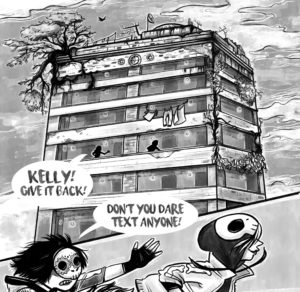 It’s twenty pages, black and white interiors as above, with a colour front and back cover, and since it’s got skeletons in it, we’re hoping to get it to you by Halloween.

At the very least, the PDF should be on sale by then. If everything goes flawlessly wonderfully (i.e. if I haven’t made any mistakes in my print set-up), we may even manage to post out print copies to reach you for the big day.