This is going to be another post which mish-mashes together some smaller points rather than having an amazing structure of its own, I’m afraid, as I’ve been writing a lot of guest-posts for other people’s blogs, so haven’t got a huge amount of fuel left in the Blog-Engine (or spare time left in the day) to produce a properly-structured masterpiece for my own.

However, I want to do some kind of update on my ongoing thousand-words-a-day writing challenge and I’ve got a few other bits and bobs too, so here’s another disjointed general summary! 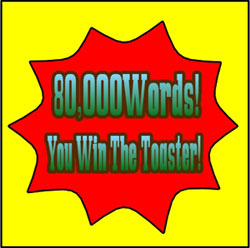 The big news (for me anyway) is that I’ve made it over the halfway mark of the daily writing challenge I outlined on this blog a month ago. My day job got quite busy for a while and then I had to publish the third Hobson & Choi book and write all those guest posts and I really thought one of those things would smash it to bits, but no, I’m still on track. In fact, I’m a few days over quota, as I’m busy most of the weekend – for reasons I’ll outline a little further down – and wanted to make sure I didn’t drop the challenge.

So, the good news is that I’ve done nearly 50k and, if this were NaNoWriMo rather than NickNoWriQuart, would have won by now. But NickNoWriQuart is both more hardcore (longer total!) and less (smaller daily wordcount!) than NaNo.

The bad news is, as with nearly all my first drafts, decent-sized chunks of the plan haven’t really survived contact with reality and various changes became necessary as I went along. This is something I’ve blogged about a fair bit – here I am talking about making less mistakes and here I am talking about plans going awry – and yet still it happens.

But I’ve got my notes, the broad plot remains in place, so I’m going to try and swoop onwards for now. Mostly because I think it would be useful to have taken a swing at the ending – more infuriating to go back now and make a huge amount of substantial change, then discover this new version doesn’t work for my ending and have to change everything again.

So, in short, everything continues as normal. I still want a full first draft by the end of November (or possibly the end of the year if I need to write a final couple of chapters in Dec) and I’ll do another update at some point. 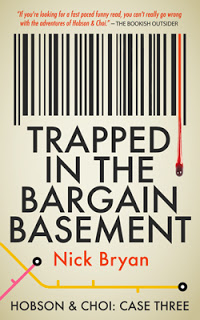 If you want something that more closely resembles a structured blog post, I’ve written this one for Jim over at YA Yeah Yeah in which I talk about five fixtures of the British high street that I could theoretically turn all crimey for a future Hobson & Choi novel.

Do give it a look for some fun. Even if you’ve no interest in hearing about my writing process (in which case the previous section of this post must’ve just killed you), this really is all silly jokes.

Oh, and as this is the only H&C-relevant section of this post – yes, the book 3 launch went fine, thanks for asking. Sold a decent amount of book three, gave away a huge amount of the newly-free-on-ebook book one.

Coming up next: some promotion, including a few more guest posts (I’ll try and list them here in some kind of link compilation) and maybe even some Multimedia Content. We’ll see if that works out.

This weekend, I am going to GollanczFest in London, in which a bunch of sci-fi/fantasy authors (who happen to all be published by Gollancz) will be talking in general about their work on Saturday and in a more advice-to-writers way on Sunday. I hope it’ll be interesting, there are some great authors in attendance (including Joe Abercrombie, Ben Aaronovitch, Paul Cornell, loads of others) and after the excellent fun of Nine Worlds in August, I’m up for more of this kinda thing.

Linking back up to the first part, GollanczFest is why I’ve written a short way ahead on the NickNoWriQuart challenge. It may also be the topic of its own blog next week, if I can think of much to say beyond “Yeah, it was good.” If you want that level of analysis, follow me on Twitter and it’s a safe bet you’ll get some over the weekend.

Okay, that turned out a decent length (if still quite bitty) post in the end. Cool cool.