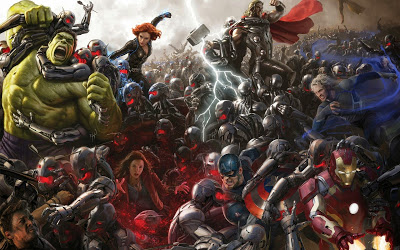 Avengers: Age of Ultron is out now all over the place, and I saw it on the opening Friday. The many solo film stars of the Marvel movies re-unite to take on an evil robot, ruptures form among the team and I’ll refrain from over-describing the film as some people might still be avoiding spoilers.

It was good, though – not as no-reservations excellent as the first Avengers movie, due to Ultron not being quite as memorable as Loki and the sheer volume of characters taking away from focus. Sill, among the upper echelons of Marvel movies and successfully kept me invested in the whole Marvel monolith.

Anyway, this isn’t going to be a straight review of the movie as there are plenty of those on the internet. The release of Avengers II served as a kinda peak point of a few months where I’ve been consuming a load of superhero media. Between DC’s FlArrow shows, Gotham, Agents of SHIELD, Daredevil and Agent Carter, that’s a whole lotta tights and tights-related material.

And that’s without even counting Walking Dead and Constantine.

Point being: I love serialised fiction across all mediums, but it kinda started with comics. So I’ve been thinking a lot about how this stuff translates because… much as I’ve liked many superhero movies, I feel like TV might be the ultimate medium for them.

“It matters that I matter,” said Batman, as he wept. 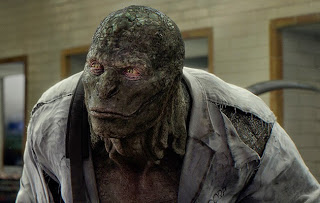 “I hate being a lizard! I must turn everyone else into one!”

Superhero comics, of course, are serialised within an inch of their lives. A lot of stories exist only to set up other stories, Some are massive huge important parts of the narrative, others just feature the characters going on a little fun outing or having development – point being, some issues do not feature top-level tension or mega-disasters. It’s fun seeing the characters just hanging out or taking on a slightly-less-A-list bad guy, but we rarely get that in the films.

Because movies, especially big expensive action movies, really fucking want to matter. Scale is their heroin and they demand every story seem like the most important thing in the world.

Sometimes this works – in Avengers: Age of Ultron for example. This is the climactic movie of the whole second Marvel phase and the threat is genuinely world-ending, so we are willing to grant the film the importance that it craves and needs.

This need for scale and importance, however, isn’t always so well-suited to the material – particularly pronounced in a lot of the earlier attempts at superhero movies, before sequels became inevitable. In a bid for drama and importance, a lot of those movies needed to have the villain assemble some kind of doomsday device and/or threaten mass destruction, often for little reason other than “Gosh darn it, this is a damned action movie picture and we gotta give the folk their destructo-spectacle!”

Which leads us to such odd denouements as Doctor Octopus and the Lizard building doomsday machines in Spider-Man movies despite just being a bit sad before that. Or the Scarecrow deciding to create a fear-bomb in Batman Begins, despite it feeling really at odds with the rest of the movie. Hell, even Magneto pulling a mutant-making machine out of his caped arse in X-Men seemed sudden to me.

Because in a TV show, you see, they could justify a finale where the hero just whacked the villain in the cock – ideally with complication or greater stakes, but still, a fight. But for many movies, that’s never quite enough and it has to be World In Danger.

This is particularly pronounced with characters like Batman and Spider-Man who generally work at smaller scales, so tone skews weirdly when the apocalypse is wanged in there.

“Steve, are people… invested in the Avengers?” said Iron Man, as he wept. 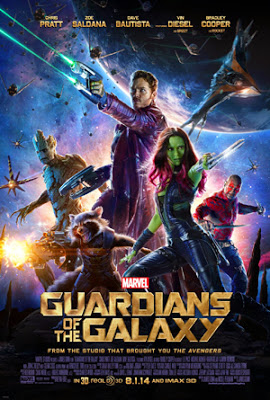 Plus, let’s be honest, too expensive for TV.

The other problem with forcing serialised narratives into movies, of course, is that it changes the nature of cinema to try and make it work, and not always in comfortable ways. TV shows are expected to leave a few loose ends hanging for the next episode/series/season, and even they eventually reach a grand finale where all threads are tied up.

A lot of this might be a psychological expectation – a TV show, as part of its make-up, is there to pull you through episodes. Films, because they’re sold as a singular experience, are expected to be more self-contained, and if all you get out of a cinema visit is that the studio would quite like you to see their other similar films, it’s understandable you’d be pissed off. This is one reason Guardians of the Galaxy was so good – it bent over backwards to be a standalone movie-style adventure romp, rather than an up-budget TV pilot.

If you flipped the psychology, I suppose, you could take this as incentive to be amazing – there’s no space for a filler episode here, guys – every installment has to brilliant in terms of quality as well as franchise maintenance, otherwise the whole house of cards might fall.

But, as hinted in the previous section, sometimes a quieter episode can build character and make the bigger ones work – honestly, one major problem with Age of Ultron for me? It felt like we were meant to invest in the Avengers as this big substantial organisation that had carved out a role and a dynamic. This would mean Ultron coming along to ruin it was a grand tragedy, striking at the heart of something precious.

Unfortunately, with only one previous Avengers film, it felt like the institution barely existed before it fell. The only chance the movieverse got to show us “a normal day” for the Avengers was the opening scene of the second film. It felt like a story where the main selling point was Smashing The Status Quo, except because we only get one film every three years, the Avengers don’t feel like the reassuring constant required for that to really kick us in the face.

Anyway, that’s just something I’ve been feeling about superheroes for a while, and with all this Ultronitude going down, seemed a good time to talk about this. I will, however, close out positive by saying this: Arrow, Flash, Daredevil, Agent Carter and, yes, even Agents of SHIELD lately, are doing good-to-great jobs of nailing all the stuff I’m talking about. If you like superheroes or serialised adventure in general but have been resisting the TV versions, I recommend giving one or two a chance. They won’t all be everyone’s cup of tea, but they’re all good serialised adventures in their own way.

Previous Post: « I Was A Pre-Teen Book Prize Judge – Nick’s Mind-Boggling Confessions!!!
Next Post: Hobson & Choi YouTube cameo round-up! See me abandon a copy of the book in a streetside shed! »