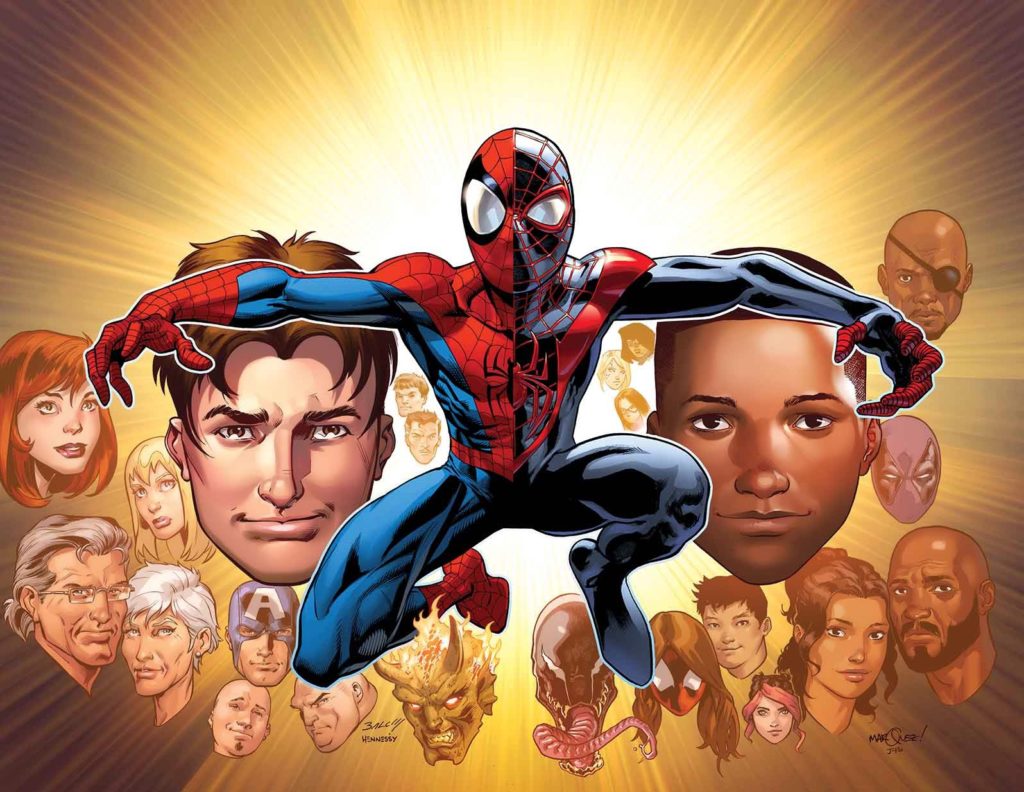 Last week, the Ultimate Spider-Man comic seemed to come to an end. It’s hard to be certain, as Marvel Comics are being very cagey about the future of their publishing line, but based on some heartfelt words from series writer Brian Michael Bendis on his Tumblr, it looks like we’ve reached the end of that book in its current form.

The character may carry on, but sounds like either he’ll no longer be written by Bendis or the set-up will be radically changed. Either way, I was inspired to produce some words, as this was a comic that meant a lot to me over the years. 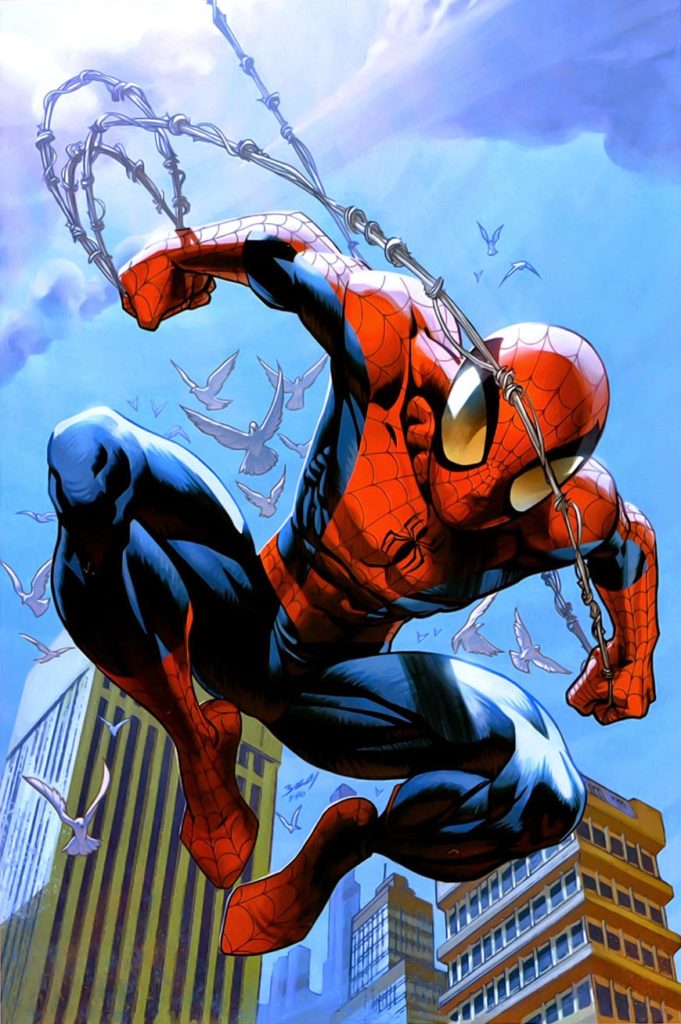 The Ultimate line from Marvel began in the early 2000s (originally under the title Ground Zero Comics, thankfully changed before 9/11), re-imagining their main characters as debuting in the present day, rather than the mid-20th century. It revised origins, streamlined continuity, tweaked premises to suit modern audiences, and was wildly successful for a while. Many Ultimate changes were adapted into the recent mega-hit Marvel movies. 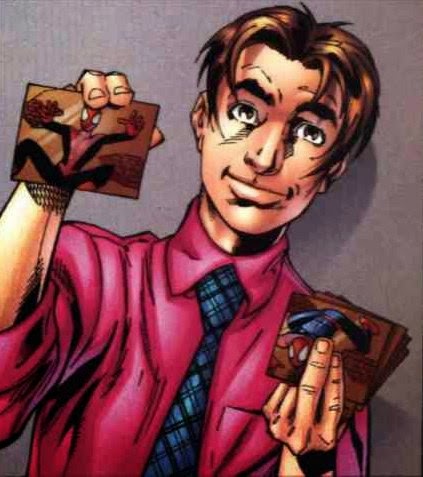 It’s just not a great haircut.

At the heart of Ultimate Spidey, and perhaps the reason it lasted such a long time when the others lost their way, was the idea of Spider-Man as a teenage character. Peter Parker re-envisaged as a modern angry, moping nerd, cursed with a terrible floppy haircut and left forever young like Bart Simpson.

If this series had a firm influence outside old Spider-Man comics, it was teen adventure dramas like Buffy The Vampire Slayer, as Spider-Man struggled with his moral obligations, supervillain battles and web of complex teenage feelings. He swung neatly from soap to action to genuinely funny comedy sequences. There was Gwen and Mary Jane, Norman and Harry Osborn, a terrifying Doctor Octopus and even a non-alien Venom. Good times.

I Was A Late-Teen Spider-Fan

I was a late-teenage Spider-Man fan while this started coming out, so I suppose there’s an obvious appeal there. But as someone who loved the sci-fi/soap opera/jokes combo of Spider-Man more than any other superhero, I thought this really captured the spirit of the character for me, distilling it into a pure form without many distractions. After all, Spidey is the forerunner of all teen relatable superheroes, and it was weird that there hadn’t really been many comics where he lived in that genre – sneaking out of school to fight the Rhino and trying to make it back in time for his date.

I also felt the length of the run did a lot for it. Obviously, not every comic book run should go on forever. Still, the feeling of a world developing, characters coming and going, all with Bendis as a unifying creative voice even after the original artist left, gave the series a feeling of authorial ownership and consistency you don’t get from many superhero comics. 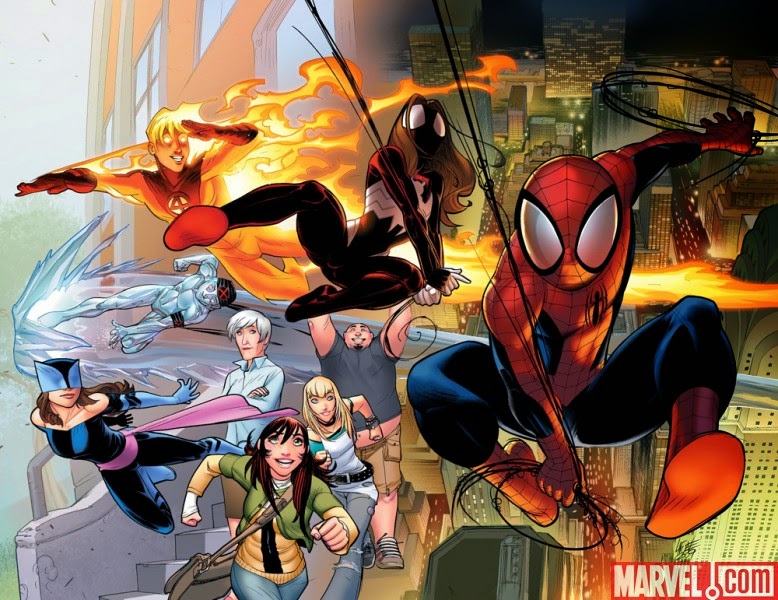 I don’t want to ignore the artists – Mark Bagley cemented himself as not just a definitive Spidey artist here, but one who can convey lengthy conversations just as well as superhero action.

The subsequent artists – primarily Stuart Immonen, David Lafuente, Sara Pichelli and David Marquez – were all top-notch too, continuing in the tradition of exciting, dynamic art that flowed through the action. They made the superhero action look like it had real weight rather than abstract gesturing, while still selling all the emotional beats.

And I haven’t even talked yet about the other major thing Ultimate Peter Parker got that the regular one probably never will: an ending. 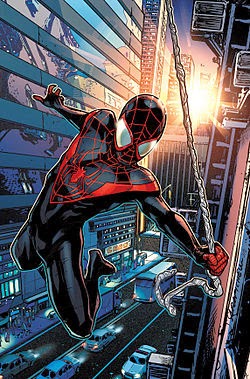 I cried when Ultimate Peter Parker died, I’m not ashamed to admit it. Series original artist Mark Bagley came back to draw that last storyline and gave him exactly the sacrifice you’d want. Seriously, if you’d been reading all along, it was a brutal, sad pay-off. Even though he might now be back from the dead, it doesn’t deaden the impact of that issue for me.

Plus it meant Ultimate Spider-Man could innovate yet again by giving us the all-new version: Miles Morales. An young biracial teenager inspired by Peter Parker’s death and just happening to acquire similar-but-not-identical spidery powers, Miles donned a redesigned Spider-Man costume and picked up where Parker left off.

Paving the way for many more diverse superhero replacements in recent years, Miles kept up the bold Spidey tradition of likability and humour in the face of horrible suffering. With Bendis still on-board as writer, he’s kept the tone consistent, continuing the Ultimate Spidey tradition of making old tropes seem new and exciting. The inspired part, I think, was yanking away the Parker-era safety net of recognising characters/stories from the original universe, but keeping the tone intact.

Sales of the Ultimate initiative trailed off in recent years, and we’ve finally reached the point of winding it down. Bendis and Bagley are re-teaming for a finale story called Ultimate End, which should be heartwrenching. Still, they’ve all but confirmed that Miles Morales will stay around in some form – based on some news stories, he may even join the Avengers.

Nonetheless, part of me feels an overhanging sadness. As I’ve mentioned, the glorious tapestry of the Ultimate Spider-Man universe is a big selling point. Bendis built a world populated by likable and memorable characters, all the better to make us suffer when he starts swinging the hammer into them.

If we lose that, even if Miles Morales himself survives, I will feel something has been lost. What about his friendship with Ganke, dammit?

Yes, the character and what he represents are important, but the Ultimate Spider-Man series, supporting cast and style meant something to me too, and if this is the end, I’m sorry to see them go. But I got to read over 200 issues of this thing I like, with pretty much uniformly great art, so I suppose my suffering isn’t quite the worst in the world.