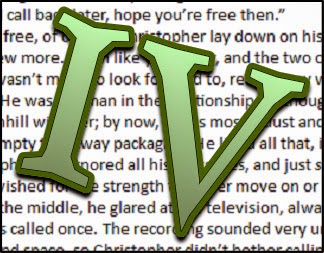 I’ve just finished draft four of the fantasy novel I’ve been writing for around 18 months. This is obviously an achievement – not a top-rated one worthy of a party, but a clear rung up the ladder.

So what does finishing a fourth draft actually mean? How many more am I planning? Do I even know?

It’s been four months since I finished the third draft, which is longer than I like to leave things when it’s just me dealing with myself. But between these two particular passes, I sent the book out to beta readers, who have been steadily telling me their feelings ever since.

The good news: they all helpfully agreed with each other on the broad strokes, making it fairly easy to come up with an action plan.

The bad news: it was a reasonably substantial action plan, some of these problems need big-time tackling and I had to go in for close and extensive surgery for my fourth draft. I’ve written a couple of new chapters, various bits and pieces inserted throughout.

Weirdly, in fact, after getting shorter throughout the earlier drafts, the novel has now ballooned to its most epic length yet. I don’t know whether I now need to go in and cut more. I do kinda agree with the two betas who said certain parts needed expanding.

In fact, here’s the numbers:

As someone who’s been there since the beginning, this novel is starting to seem like some weird Frankensteinesque experiment. An expanding one.

But nonetheless, I’ve finished now and my creation lives. So what now?

Fifth draft, I suppose? Which involves smoothing all those changes down, making sure everything’s consistent, perhaps punching up the language and involving a second wave of beta readers?

Hopefully this will be the last lot of betas. I suspect once you’ve taken it through twice, you probably start to run out of people to experiment on?

I think I’m circling around the notion of finishing, basically. I’m pretty happy with the changes, although still mildly annoyed with how long it’s ended up taking, thanks to some slightly weak planning at the start.

And on the double-plus side, I don’t have to decide whether to go straight into the next draft, as my editor sent his thoughts through on Hobson & Choi Book Two, so I’m doing those next!

Problem solved. Blog about that project soon enough, I imagine. In fact, there are a few H&C bits I need to post about.