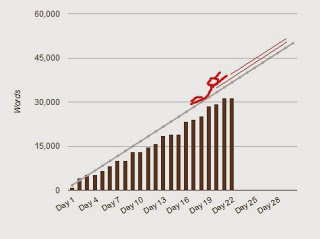 So, as of this writing, I am 31.3K words through NaNo, and the bad news is: barring a miracle, I am unlikely to make 50,000. I know, I was disappointed too. It’s still possible I might finish the novel, then crunch through about five chapters of Hobson & Choi in advance to take me over the edge, but realistically I am probably going to pound out the final scenes early next week, then spend the rest of the month partying.

And by partying, I mean watching DVDs and tweeting. Nonetheless, there is good news too, and it was kinda spoilered in the last para: unless I break all my fingers in the next few days, I will most likely finish the first draft book I am working on. So that’s nice, for reasons I already outlined last week. See adjacent graph for more detail on my word progress.

This will be my fifth or sixth stab at NaNoWriMo, and I’ve almost always made the 50K, but 2013 will be the very first time I’ve managed to complete a novel during the challenge. If only I’d started said novel in November (rather than April), I would be living the NaNo Fairy Tale.

As it is, I’ll have to be happy with just meeting my own personal deadlines. However, I’m also gathering up a towering, looming monster of an edits list. Last week, I also ruminated on how many planning and plotting problems I’ve run into as I’ve tried to make the final act of the story work, but concluded that I thought I’d finally arrived at a new plan which got me out of those particular woods.

Turns out, that particular oasis was a mirage, and beyond the woods, there were just similar woods, with spaces between them to catch my breath. They’ve become easier to traverse with practice, but nonetheless, steering this fucker to its close is akin to wrestling an octopus. You just can’t seem to pin down all the arms.

Please don’t ask me what an octopus is doing in the woods, I do not know. Clearly it is a member of the less well known octopi species Mixus Metaphorus, which dwells in whatever environment a rambling writer requires.

Basically: I had to re-plan chunks of the ending between every chapter. Each one now refers to a version of the story which doesn’t completely exist. If you tried to read my current draft, you’d wonder if you were having blackouts.

Despite all that, I’m going to press on until I’ve finished the story, for all the reasons I said last week, and then, come 2014, I’m going to take the whole damn thing in hand. And I’m still not going to refer to it as Draft 0.5 or anything like that.