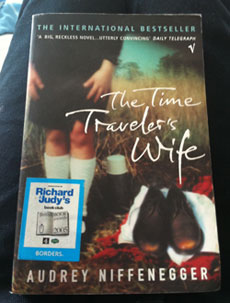 You thought my review of Genus was tardy? Well, I’ve topped that: this Untimely Book Review covers The Time Traveller’s Wife by Audrey Niffenegger, which has a battered sticker on the cover pledging allegiance to Richard & Judy’s Book Club 2005!

But I remember when this damn book was everywhere, so I’m hoping a few of you have read it. Let’s talk!

This is one of those amazing high-concept stories where the premise is in the title, but I’ll break it down anyway: this covers the meeting, wedding and more of Henry and Clare, out of order, because Henry has a strange genetic disorder causing random time travel. (No, I don’t consider their marriage a spoiler. For some unknown reason.)

That’s really kinda it. It’s romance with a sci-fi twist, and for about the first half, I was enjoying it. The out-of-sequence courtship was sweet, and there are enough clever uses of time travel thrown in to make it appealing to people like me, who are reading because they like soft sci-fi/Doctor Who, and want to see what the fuss was about.

Of course, the romance boot eventually drops as it was always going to. The inventive time-twisting continues to the very end, to be fair, but angst and melodrama kick in damn hard too. If you want to believe that life won’t immediately become miserable once you get married, don’t read this book, because that’s more or less the plot.

Oh, and Henry is a very obvious hot-indie-kid character at times. Yes, Niffenegger goes out of her way to say how damaged he is, but never makes it matter, because Clare will inevitably fix him. That’s one downside of the ongoing pre-determination theme, I suppose. Saps drama.

Which brings me to the ending (NON-SARCASTIC SPOILERS NOW) where the inevitable happens and then the book just stops, all character threads except the Henry/Clare relationship hanging in mid-air. It reads more like a memoir than a real novel, and if that’s what you’re trying to do, then fair enough, but I like novels to feel more plotted.

I feel bad looking back over this review, because there were lengthy spells, even in the grim second half, when I was genuinely enjoying this book. I’ve probably made it sound like the whole thing was drudgery, but if the central idea of “romance with sci-fi twist” completely appeals, it’s probably worth reading. I’m just not much of a romance reader.

I say all this as if everyone who cares hasn’t already read it, of course. But if you can remember what you thought of this book, feel free to disagree with me in the comments.