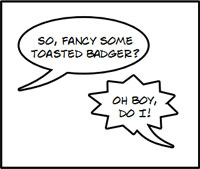 Close followers of my work here, specifically the Friday stories, might note I’ve done a few in an all-dialogue format. Like this one, also one of my only “science-fiction” stories. Or kinda this one too. And the new one I’ve just written for Friday. So clearly I’m a big fan.

It’s just easy to write, isn’t it? Flows off the tongue like, well, speech. Maybe it’s the hours I spent reading those Aaron Sorkin script books, but I kinda love it. Unfortunately, I also worry I enjoy it too much sometimes. (Hence the title – apologies if anyone was expect an ode to the creative arse.)

“Ah, Rupert, I see you are removing the badger from the toaster.”

This is the biggest issue I have when writing largely in dialogue, and I’ve been knocked around for it by tutors: the danger of getting over-theatrical.

This results in characters saying things like the above, basically filling in for the absence of prose or stage directions. After all, the reader won’t know what’s going on if the characters don’t state it, but they also end up talking in a way no-one does in real life.

On the other hand, this is a very specific problem. If you have any prose (or stage directions if you’re writing script) then, hey, problem solved.

“The angry badger has embedded itself in the wall whilst trying to extinguish the fire in its tail.”

Dialogue often has the fun bits, doesn’t it? This problem is particularly common in speed-writing projects like NaNoWriMo, but for me, it’s a never-ending battle: dialogue rolls off easily, prose requires hard work.

So, when editing, I end up chopping out a lot of the dialogue. Yes, even if that joke was awesome, sadly, it often isn’t necessary, so you have to kill your babies. (NOT LITERALLY FOR THE LOVE OF GOD.) I’ve also been writing more in the first person, which circumvents the problem by making narration more chatty. Clever, eh?

“Um, I don’t wanna, y’know, moan, but would someone reeeally put a badger in a toaster?”

It’s been established by smarter minds than me that fictional dialogue is rarely “realistic”. I may love the stylised dialogue of Aaron Sorkin, but people don’t really talk like that.

So we stumble across the distinction between “realistic” and “believable”. Strictly realistic dialogue would feature a lot of “um” and “kinda”, and reading it would be a nightmare. Awful BBC improv drama True Love featured actors improvising the banal conversations real people would have, and watching it was like dying and discovering hell is a never-ending bus queue.

So, in summation, dialogue is amazing, as long as it isn’t over-theatrical, over-used or too believable. Did I cover everything? What are your dialogue issues? Feel free to comment below, I need fodder for the follow-up post.