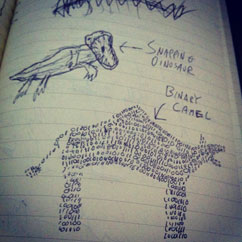 The real world isn’t as conducive to beautiful literary representation as it was back in the day. Real-life dialogue too often takes place via text, email or instant messenger, which means ur book might have 2 feature awful abbrvtns and smiley faces. 🙁

Many authors would rather be kicked in the crotch by a centaur (or a binary camel – see illustration to right) than incorporate any of that modern nonsense, but it’s increasingly hard to avoid. Everyone is obtainable all the time, so what’s your excuse for any character being out of the loop when they could call, email, text or tweet someone? Isn’t it funny how they keep losing their mobile phones?

And that’s not even getting into the woe of the crime/mystery writers, who have to explain why the puzzle wasn’t unravelled in seconds thanks to modern forensic technology. Small wonder that many detective stories are now set in the past, where authors can wallow in old fashioned sleuthing without having to worry about whether the murderer left a DNA sample when he shoved his thumb into the victim’s eye socket.

Personally, I’m weirdly fascinated by the possibilities, but I have worked in IT for five years, own a smartphone and use Twitter to an unsettling (or just annoying – follow me now on @NickMB!) degree. So I’ve written a range of stories, not to mention a novel, exploring the exciting new worlds of internet communication.

But even I hit problems occasionally. Primary among them: people using a computer is not the most dramatic activity. It becomes harder to really get body language among the dialogue when, often, you’ve only got one half of the conversation visible, and all they’re doing is typing. Are you going to sully your novel with internet messages containing actions between asterisks? *cries*

Of course, you can always send them off on merry internal monologue and that’s your one scene or short story sorted, but it’s hardly the long-term solution. What happens next time?

As I say, I like this stuff, but still work hard to find new ways of expressing the use of computers. So, how do you get around this? Is there an easy answer, beyond “stop writing about geeks, you geek”?

All suggestions welcomed. As hinted earlier, this is somewhat of a pet topic, so I imagine it’ll come up again.